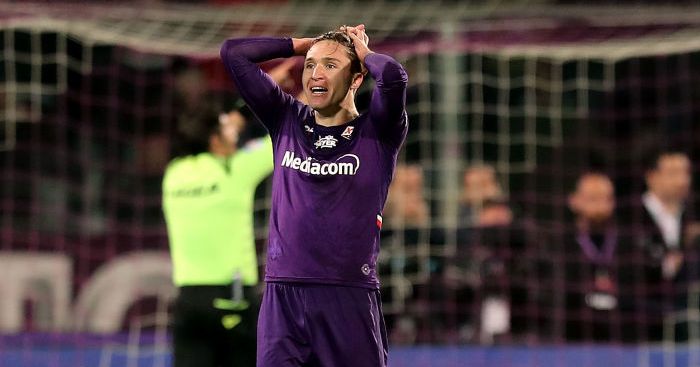 Man United want another legend’s kid. And they are going to throw all of the money at their main target.

CHIESA TO THE CASTLE
Man United seem to have developed something of a fetish for footballing sons of former players. Having supposedly turned down the chance to sign Alf-Inge Haaland’s boy in January, they might make a move for Enrico Chiesa’s kid this summer.

While the player, contracted to Fiorentina until 2022, can play across the front three, his primary position is one Solskjaer ‘is likely to strengthen’: right wing.

Man United will also ‘have noted’ that Chiesa has made a start on English lessons, while the Juventus and former Liverpool target, valued at £60m, has seven goals and five assists in 25 appearances this season.

STATUE OF DAVID
In other scouting news, Chelsea ‘had a spy in the stands’ to watch Jonathan David against Roma in midweek. Unconfirmed reports suggest he was wearing all-black attire with a fedora and sunglasses, while carrying a magnifying glass.

The story comes courtesy of the Daily Express, who proceed to link Gent with the entire Premier League. Man United, Liverpool, Tottenham and Leicester ‘also checked him out’, as well as Aston Villa, Wolves, Southampton and West Ham.

The Gent striker’s price has already risen from £18m on Wednesday to £20m four days later. He did score against Roma, to be fair.

(ONE-HUNDRED-AND-FIFTY-THOUSAND) GRAND PLANS
As well as signing £80m worth of young people, Man United are also preparing a tempting wage packet for their main target.

The Sun they ‘are ready to offer’ Jack Grealish £150,000 a week to join this summer. It would both treble his current Villa earnings and put him on par with Luke Shaw.

While it is framed as a statement of intent, the claim that Man United ‘are prepared to pay up to £60m’ seems a little underwhelming. He is a 24-year-old club captain with vast Premier League experience, plenty of time left on his contract and England caps in his immediate future. Less than a Nicolas Pepe feels low.

The rest of the report contains vague platitudes, such as Grealish being ‘seen as another key block in the rebuilding process’. Or the news coming ‘as a blow’ to Villa fans, who have been listening to and reading this sh*te for a few years now. Or how Paul Pogba, who would leave were Grealish to join, could still move to Real Madrid for £150m; Marca stated that Real were not interested in the Frenchman this weekend.

AND THE REST
Barcelona are keeping a close eye on Arsenal striker Pierre-Emerick Aubameyang, 30, who is out of contract at the end of next season… Arsenal are ready to pay a £42m release clause for the summer transfer of Atletico Madrid’s Ghanaian midfielder Thomas Partey, 26… Atletico Madrid will make Wolves boss Nuno Espirito Santo their number one target if Paris St-Germain lure Diego Simeone away from the Spanish capital… Manchester City will have to pay £40m if they want to sign 23-year-old Everton defender Mason Holgate… Everton manager Carlo Ancelotti is prepared to offer Mason Holgate, 23, a new contract to fend off Manchester City’s interest… Sheffield United have had an £11m bid for highly-rated Trabzonspor keeper Ugurcan Cakir, 23, rejected by the Turkish club.