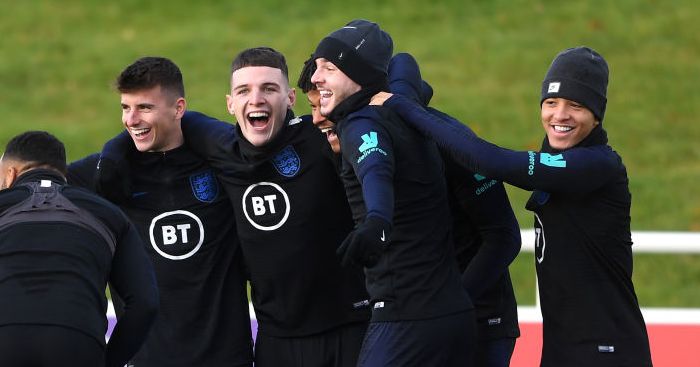 TWO LIONS
The accepted wisdom is that Man United will sign either Jack Grealish or James Maddison this summer. The latter was once their primary target before it emerged that he was likelier to extend his Leicester contract. The former then took precedence.

But The Sun are here to tell us that United are signing both. Forget the issues that would raise regarding an unbalanced midfield, because they are young, hungry, English and ‘close pals’. Champions League, here we come.

United apparently hope their friendship will make a ‘mega double-raid’ easier to pull off. Any money generated by Paul Pogba’s sale will be made available to Ole Gunnar Solskjaer; £150m is the price they have put on the Frenchman’s head.

And The Sun provide a breakdown of costs. Maddison could be tempted by the prospect of doubling his potential earnings with a £200,000-a-week deal if he joins for £90m, while Grealish ‘is beginning to accept’ he must leave to further his international and club aspirations. Yet £70m still seems low for a 24-year-old club captain with more than three years left on his contract at a club who would absolutely not want him to leave.

The Sun themselves said Villa ‘would want up to £60million’ for Grealish on Sunday. If they wait a couple more days they could get at least £100m, surely?

SANCH DRESSING
Put the questions as to where Grealish and Maddison would fit into the same team aside, because Man United are also ‘determined to beat’ Chelsea to the signing of one of Europe’s most productive talents, Jadon Sancho.

With Borussia Dortmund ‘ready’ to sell the England international this summer, Chelsea are interested due to Pedro and Willian’s uncertain futures. But United think they can ‘edge out’ the Blues.

The Daily Mirror add that this ‘has become a two-way fight between the Premier League giants’. If only Chelsea and United bid this summer then the transfer gossip column will eat all proverbial and actual hats.

Sancho was never going to be particularly cheap, but Dortmund hope they can translate such high-profile interest into a bidding war worth a potential £120m. And they are probably right, even if we do have our own doubts.

THE HAKIM SNATCHER
Chelsea and Man United will do battle elsewhere, too. The Sun say the ‘hugely frustrated’ Frank Lampard ‘is ready to relaunch’ his efforts to sign Hakim Ziyech, with United and Arsenal ‘also tracking him’.

Ziyech impressed for Ajax during their run to the Champions League semi-finals last season but was forced to stay in Amsterdam and watch his peers leave for greater things.

He has not quite reached those same heights this campaign – although eight goals and 21 assists in 29 games is nothing to be sniffed at – yet could still command £45m. That hat-trick of assists against Chelsea during November’s 4-4 draw won’t have hurt his cause.

The Telegraph add that Chelsea ‘will watch’ Ziyech ‘for the remainder of the season’. Creeps.

AND THE REST
Liverpool are preparing to offer Netherlands defender Virgil van Dijk, 28, a new deal worth more than £150,000 a week…Tottenham are preparing a £40m bid to try to sign Bournemouth’s Dutch centre-half Nathan Ake, 24…However, Chelsea could re-sign the Netherlands defender as they included a buy-back clause when they sold him to Bournemouth…Chelsea are also considering a £12.7m deal to buy back Sassuolo midfielder Jeremie Boga, 23. The Ivory Coast international left Stamford Bridge for Serie A in 2018…Ajax are considering a summer approach for Tottenham and Belgium defender Jan Vertonghen, with the 32-year-old out of contract at the end of the season.

Manchester City, Manchester United, Liverpool and Atletico Madrid are all interested in Verona and Albania defender Marash Kumbulla… Aston Villa are prepared to offer Crystal Palace £15m for Norway striker Alexander Sorloth, 24, who is currently on loan with Turkish club Trabzonspor… Liverpool are keeping a close watch on Benfica’s Brazilian striker Carlos Vinicius and are growing increasingly interested in signing the 24-year-old… Newcastle United are among the teams who are interested in Club Bruges’ Nigerian striker Emmanuel Dennis, 22… Arsenal are monitoring French 21-year-old midfielder Pape Gueye, who plays for Ligue 2 side Le Havre, ahead of a possible summer move.