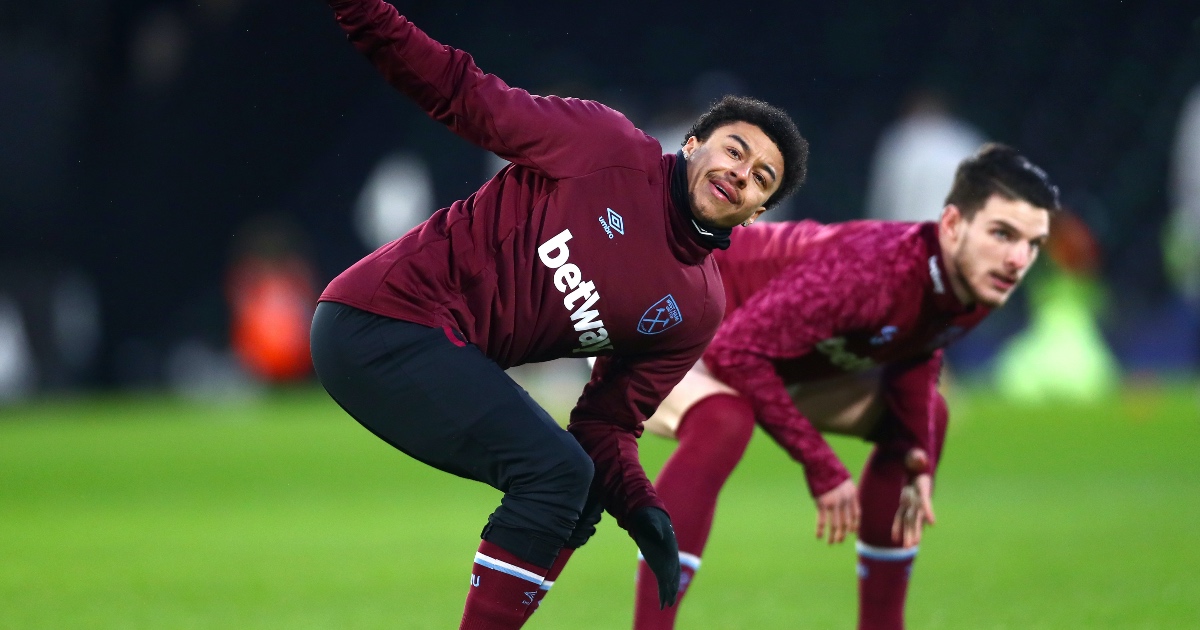 STICKY RICE DEAL
Manchester United are reportedly very, very keen on signing Declan Rice from West Ham. And have come up with a bizarre, convoluted way of getting a deal done.

The Hammers were thought to be holding out for around £70million last summer, but the player’s representatives now believe a deal could be done for £50million. It’s not entirely clear how or why Rice’s value has dropped £20million with West Ham fourth in the Premier League, but hey-ho.

That news has attracted both Liverpool and Manchester City, but the report claims that United are keen to steal a march on their rivals by offering up the trio in exchange.

The report also states that Martic, Jones and Lingard are worth a combined £30million – which right now would seem like a bit of a bargain for Lingard alone – meaning United would have to stump up a further £20million for Rice.

West Ham are said to be ‘open to the idea’ but are concerned over the £100,000-a-week wages of Lingard, with Matic and Jones also earning similar.

That could apparently see United cover their wages ‘for at least 12 months’, which for players sold rather than loaned out seems utterly mental, and frankly, absolute bullsh*t.

Could United not just pay the equivalent of the £70million with the players and money and avoid this wages nonsense? Yes, yes they could.

POPE PRICED
Tottenham are reportedly considering an offer for Burnley stopper Nick Pope as they seek a replacement for Hugo Lloris, and they’ve now been told the transfer fee they must muster to lure him away from the Clarets.

Picked up for £1.5million from Charlton in 2017, the England international is now priced at £50million, according to LancsLive.

Pope signed a new long-term contract in 2019 which keeps him at Turf Moor until 2023 with the option of an extra year.

Sean Dyche has already stated that the club no longer need to sell players when offers come in, meaning the chances of Spurs signing the goalkeeper for the £30million they are willing to offer are very slim.

“The difference is we’re not having to sell,” Dyche said. “If we sell it will be a decision made for different reasons than would have been the case four or five years ago.”

However, he added: “Eventually every player has their price and you’ve seen some astronomical fees paid for people.”

MBAPPE CLARITY…
Kylian Mbappe will continue to be linked with Liverpool until he signs a new PSG contract or moves to Real Madrid.

PSG director Leonardo moved to clear up the situation, but did nothing of the sort. Who knows what he’s talking about here…

“I was surprised at the judgements about Kylian,” he told France Bleu.

“He has a course. Its position is every time more important. Kylian, since he started in Monaco until today, it’s so huge and unique that we can’t discuss what he is or not. He already has the responsibilities. Then there is the constancy, the path. We talk, we’ve been talking for a long time.”

Huh?! Is he staying or going Leonardo?

“Our position is clear, we know what we want. We will arrive at the moment when a decision will be made. We have a good opening of the dialogue. We’ll decide soon.”

He hasn’t got a clue either.