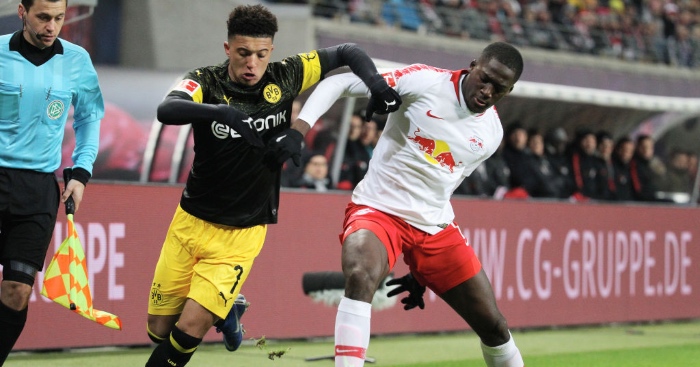 But United will have to sell before making a move for the RB Leipzig centre-back, because – according to the Express – the money they do have to spend on transfers is being reserved for Jadon Sancho, who remains their ‘priority target’.

Ole Gunnar Solskjaer is looking to bolster his defence, to provide competition for Harry Maguire and Victor Lindelof, and Upamecano – as one of the hottest prospects in Europe – has been identified as an upgrade at the back.

But with funds tied up in a potential move for Sancho, United will have to spend within their means and will attempt to raise a few pennies from the sale of three centre-backs to do so.

Roma are targeting a permanent move for Chris ‘Smalldini’ after a sparkling loan spell with the Serie A side, while United are also hoping to profit from the exits of Phil Jones and Marcos Rojo.

SNEAK FOR SANCHO
While we included Upamecano as one of five players United need to challenge for the title, Sancho did not make the list. We assumed his long proposed move was dead in the water, at least for now. But not so, according to Mail Online.

United are instead attempting to get Sancho and his agent on side before submitting an official offer.

Dortmund chief Michael Zorc insisted last month that there was “no chance” United would sign Sancho this summer after they missed a deadline to agree a deal for the winger.

But the report claims United are preparing to go back in for the England international, but will first sort out the salary and fees of intermediaries before approaching Dortmund with an official bid.

MONEY MENDY
Chelsea legend turned technical and performance advisor, Petr Cech, has said that Kepa Arrizabalaga will be given another chance at Chelsea, after a torrid campaign at Stamford Bridge saw him relegated to the bench for the last three games of the season.

L’Equipe had claimed £22million would be enough to seal his transfer from the Ligue 1 club, but The Telegraph suggest they will need at least £30million to secure his services.