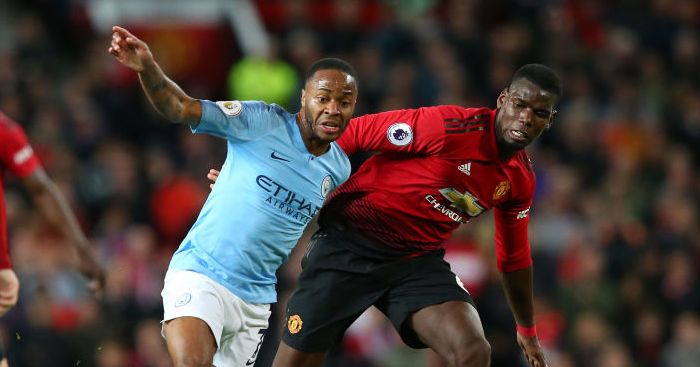 Man United know not the meaning of a transfer shortlist. They are linked with 14 players on Sunday. Fair.

STERLING EFFORT
They are claims based on little more than ifs and buts, but Sunday’s newspapers are full of yet more potential repercussions for Manchester City in their fight against UEFA. Some say they could have titles stripped, others speculate over the future of Pep Guardiola, and the Mail on Sunday suggest that three players in particular could be sold.

Kevin de Bruyne and Raheem Sterling will ‘be viewing developments closely’ and City ‘may have to consider selling them if they want maximise income and break even going forwards’. Aymeric Laporte is the third possible departure.

But little more is said of the trio, who were likely picked because they are City’s most valuable players based on age and ability. So we go to The Sun for something juicier. And they say Real Madrid ‘will launch an all-out-assault’ to sign Sterling.

It could just be an attempt to derail their upcoming Champions League opponents, but Real have long held an interest in the forward. They add that they ‘were already planning’ a £180m move but City’s plight has given them renewed optimism.

City had been hoping to improve Sterling’s contract but will hardly be in a position to boost wages considerably if the UEFA charges are upheld. So Real are looking to take advantage where they can.

POGBA PLANS
Down the A57, Man United are putting their own transfer plans in place. They won’t move for De Bruyne or Laporte but seem determined to ship Paul Pogba out.

Their valuation of the midfielder has dropped, although to what depends on who you believe. Earlier this month it was £150m; the Sunday Mirror say it is £130m; sister publication the Daily Star claim it to be £100m.

The latter suggest that Man United are ‘desperate’ to sell Pogba before Euro 2020 in case he picks up an injury or becomes a ‘distraction’. And the money could be used to fund moves for ‘two new midfielders’, one of whom would be Eric Dier.

The Mirror, however, say it will be used to sign Jack Grealish and James Maddison.

£100m for that lot does sound rather cheap.

RAMSEY TREAT
The solution could be in the sort of move which is always reported on but rarely happens, certainly in the Premier League: the glorious part-exchange.

It’s La Gazzetta dello Sport who bring us the news that Juventus are preparing a package to try and tempt Man United into a Pogba deal. They either can’t or won’t match his valuation outright.

Their solution will be to bid ‘between €45m-€50m’ – £37.4m-£41.5m – with either Aaron Ramsey or Adrien Rabiot offered as a sweetener. Neither are young, English or hungry enough to catch Ole Gunnar Solskjaer’s eye.

AND THE REST
Man United manager Ole Gunnar Solskjaer’s future is in doubt after he failed to sign three top targets in the January transfer window… Former Tottenham manager Mauricio Pochettino is in pole position to replace Manchester City boss Pep Guardiola if the Spaniard decides to leave the club… Chelsea are planning a £23m summer move for Inter Milan’s Uruguay midfielder Matias Vecino, 28… Inter Milan manager Antonio Conte is interested in signing Arsenal and Gabon striker Pierre-Emerick Aubameyang, 30… Arsenal left-back Kieran Tierney is a target for Leicester City boss Brendan Rodgers, who managed the 22-year-old Scotland international during his time in charge at Celtic… Former Juventus boss Massimiliano Allegri is the leading candidate to take over at Man United if they decide to sack manager Ole Gunnar Solskjaer.