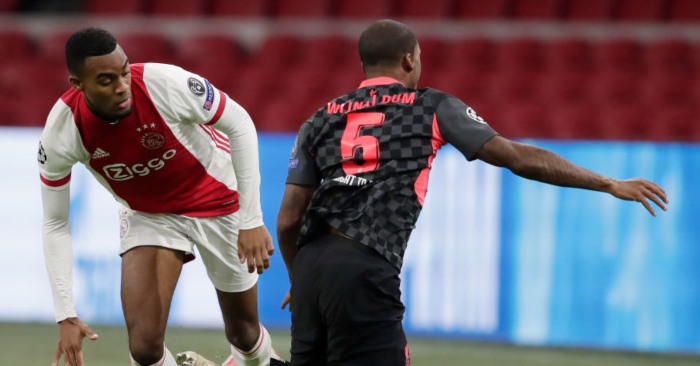 The latest teenager off the Ajax production line is 18-year-old Ryan Gravenberch and the Mirror claim that Manchester United are ‘keeping tabs’ on the Dutch Under-21 central midfielder who is a target for Barcelona and Juventus. Gravenberch has already played 20 games for Ajax, scoring four goals and assisting three. He has started every game for which he has been available this season, including the 1-0 defeat at home to Liverpool.

According to Mundo Deportivo – who first broke the story about interest from Barcelona and Juventus – he is valued at around £20m. Oh and his agent is Mino Raiola, so this could be fun.

READ MORE: Solskjaer produces his greatest game from embers of his worst

Ozan Kabak does not appear to have put off his suitors by playing 90 minutes of an 8-0 thrashing by Bayern Munich and then being sent off 84 minutes into a 3-1 defeat to Werder Bremen; the 20-year-old Turkish international has actually gained a suitor in AC Milan, according to Gazzetta Dello Sport.

Liverpool are expected to move for Kabak in January – with Schalke setting a price of around £20m – but it now seems like they may have some competition. There is some sketchy talk of Manchester United also being interested, with Inter Milan also mentioned.