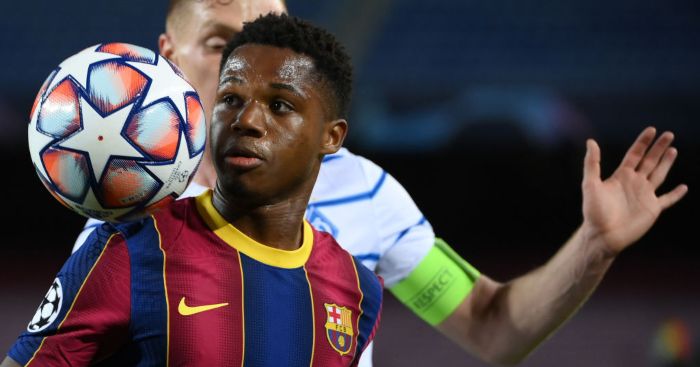 Man Utd made a bid of £134m for a Barcelona youngster, while Arsenal are working on a £23m deal…

I’M SO DIZZY MY HEAD IS SPINNING

Manchester United had a £134m (€150m) bid rejected for Barcelona youngtser Ansu Fati in the summer, according to reports. The Spanish side, however, would now consider that deal if it was brought before them again.

The 18-year-old has had an impressive breakthrough season at the Nou Camp, scoring seven goals in 24 league appearances. He’s also broken numerous records in the process. His contract is set to expire in 2022, which could entice Man Utd into a big-money move as they continue to be linked with his signature.

It has previously been claimed that Man Utd are ‘stalking’ the Barcelona youngster ‘more than anyone’ with Barca not interested in ‘mega offers’ from the Red Devils.

And now Sport (via Sport Witness) claims that Barcelona rejected a ‘dizzying’ £134m (€150m) bid from Man Utd in the summer for Fati. His representative, Jorge Mendes, brought the proposal to Barcelona’s door and the Portuguese super agent ‘had already sold’ Fati.

Despite that, Barcelona ‘refused to assess the proposal’ but could now have a change of heart. If the same terms were brought to them again ‘in times of crisis’, Sport says that Barcelona would have to consider the deal. Mendes would be able to put ‘brutal’ pressure on Barcelona to sell due to their financial situation.

Barcelona do remain confident that they can keep Fati at the Camp Nou with the youngsters current contract including a €400m release clause. Mendes ‘smells money in the short term’ and it will be ‘the great challenge’ of the next Barcelona board to convince Fati to stay.

BREAK IT DOWN NOW

Arsenal are looking at ways to structure a deal to bring RB Salzburg midfielder Dominik Szoboszlai to north London in January, acccording to reports.

The youngster became a big player for the Austrian side last season, making 40 appearances and contributing 12 goals and 18 assists for them in that time. The 20-year-old has carried on that great form into this season, with five goals and nine assists from 13 appearances in all competitions.

That form has made him one of the hottest properties in Europe with Arsenal, Bayern Munich and Real Madrid all linked with transfers. The Hungary international has a £23m release clause in his contract and now the Daily Mirror claims that the Gunners ‘are exploring ways to structure a deal’ for Szoboszlai.

The report adds that ‘the Arsenal hierarchy hopes to prise Szoboszlai from Red Bull Arena by meeting his release clause in three yearly instalments, rather than as an up-front sum.’ Mikel Arteta is said to be ‘keen to add a creative midfield force to his side’s ranks’ with Lyon playmaker Houssem Aouar heavily linked over the summer transfer window.

Ronald Koeman refused to answer questions over Lionel Messi’s future as he called for more respect for the Barcelona superstar…Switzerland midfielder Granit Xhaka has no plans to leave Arsenal for Inter Milan in January…Juventus are happy to take their time over exercising their right to buy Alvaro Morata for £40m next summer…Fabinho was pictured in full Liverpool training and the Brazilian now looks set to return against Leicester on Sunday.