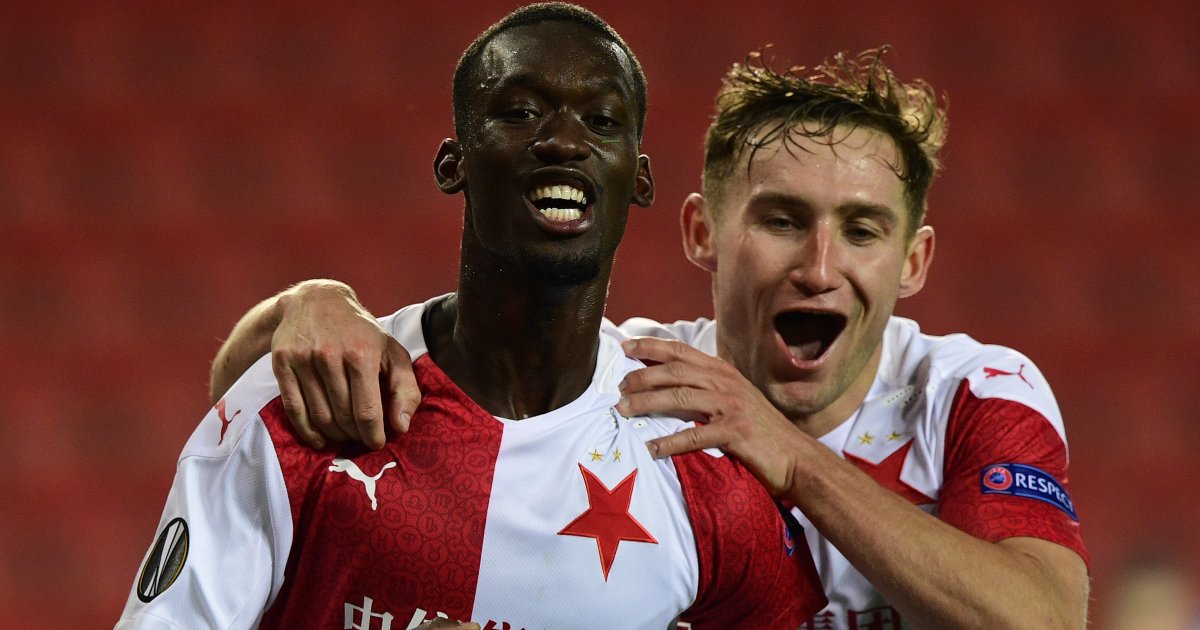 UNITED, ARSENAL AMONG SIMA SUITORS
There have been whispers before about Manchester United’s interest in Slavia Prague striker Abdallah Sima. Now it seems the Red Devils have competition.

According to The Mirror, Arsenal are also sniffing around the 19-year-old with a number of other Premier League sides also keen.

West Ham are mentioned as one suitor for Sima, who has 19 goals this season. Apparently, Slavia Prague are looking for £50million. If you don’t ask, you don’t get…

The bidding has apparently started at half that price, with the Evening Standard reporting that one club has already submitted an offer worth £25million.

GUNNERS DIGGING AROUND BERGE
Sima could the striker Mikel Arteta is looking for amid five potential new signings this summer.

Goal claims the Arsenal boss wants to sign two full-backs, a central midfielder and a goalkeeper in addition to a striker.

The midfielder could come in the form of Sander Berge. The Athletic has an in-depth feature on how Arsenal are going about reshaping their scouting department, within which it is revealed that any potential new scouts are being asked to present an analysis of two players: Joe Willock, on loan at Newcastle from Arsenal, and Berge.

The Norway midfielder is one of the players Sheffield United will look to cash in on following their relegation, with Arsenal among the clubs seemingly not put off by his £35million buy-out clause.

Relegated XI: The best players saying goodbye to the Prem for now…

ROY OUT, FRANK IN
A couple of managerial lines: Frank Lampard has apparently emerged as the leading contender to replace Roy Hodgson at Crystal Palace.

Like seemingly everyone at Palace, Hodgson is out of contract this summer and there are few signs of an extension.

The Telegraph says the Eagles are still deliberating over whether to change their manager, with talks planned at the end of the season.

But, in the meantime, former Chelsea manager Lampard has been identified by Palace as the ‘frontrunner’ for the job.

Premier League team of the season: One player per club

BARCELONA SOUND OUT FLICK
Hansi Flick is also on the hunt for a new job as he prepares to leave Bayern Munich this summer.

The 56-year-old has been heavily linked with the soon-to-be-vacant Germany manager’s post, with Joachim Low stepping down after the European Championship.

But ESPN says Barcelona have sounded out Flick about the possibility of replace Ronald Koeman as doubts apparently grow over the Dutchman’s future.

It seems Barca have moved too late, however, having been told that a deal for Flick to replace Low is close to being finalised.

The biggest spender in every PL season – and how they fared

BUFFON OFFERED BARCA SWANSONG
Barca are also being linked with a move for Gianluigi Buffon.

The beautiful veteran goalkeeper has announced that he will leave Juventus this summer but the 43-year-old hasn’t ruled out playing on.

Foot Mercato says Barca have been in contact with Buffon to see if he fancies bringing down the curtain on his career at the Nou Camp.