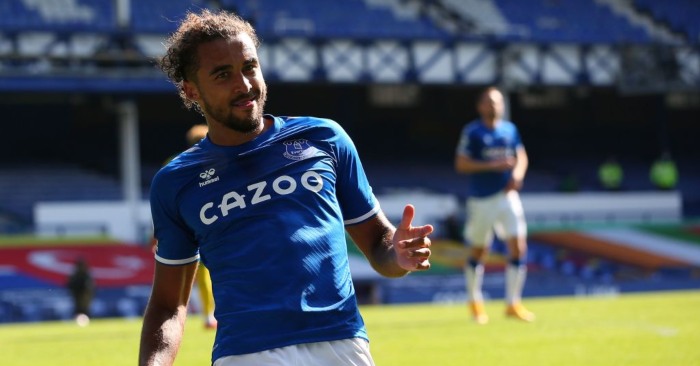 The pummelling at the hands of Palace has prompted ‘a shift’ in United’s transfer approach. Another one…

MAN UTD SHY AWAY FROM EVERTON STRIKER
Any Tuesday that follows a weekend during which Manchester United sh*t their own bed is usually prime-time for transfer dross involving the Red Devils. So let’s dive in…

The Sun reports that United have packed in a pretty pathetic pursuit of Everton striker Dominic Calvert-Lewin. There were a few whispers of their interest earlier in the year but the story goes that United have backed all the way off after making an initial enquiry to Everton.

Apparently, the Toffees want £80million for the centre-forward with four goals in two Premier League games this term. Ed Woodward probably had something in mind closer to a fiver plus Jesse Lingard.

TELLES TALKS ‘ADVANCED’ BUT NO DALOT IN DEAL
Luke Shaw could have his wish for new signings granted this week if Alex Telles arrives from Porto to take his place.

The Manchester Evening News says their opening game defeat to Palace has prompted ‘a shift’ – yet another – in their approach to the rest of the summer window, with it now being recognised that solidifying their defence cannot now wait until next year. According to the MEN, ‘United transfer negotiator Matt Judge contacted intermediaries following the weekend humbling’ which in itself is progress, if Patrice Evra is to be believed.

As far as Telles is concerned, United know the left-back has a £36.7million buy-out clause but The Guardian reports that since the 27-year-old is entering the final year of his contract at Porto, they have no intention of paying more than £23million.

O Jogo reckons United tried to chuck Diogo Dalot in as part of the deal for Telles but Porto aren’t interested in taking back their former defender.

RED DEVILS MUST SELL BEFORE UPAMECANO OFFER
Not even Woodward could watch Victor Lindelof have his pants pulled down by Palace last weekend and refute the fact that United need a new centre-half.

The Telegraph reports that the Red Devils are keen on RB Leipzig defender Dayot Upamecano, which is nothing new. But it seems United will have to shift some of their deadwood before being able to launch a serious offer for the 21-year-old.

LIVERPOOL AND REAL IN MBAPPE HUNT
Kylian Mbappe continues to have his name linked with Liverpool, though at least L’Equipe’s story doesn’t attempt to draw tenuous parallels with the signing of Thiago Alcantara, who we learned on Sunday isn’t mute.

This report suggests Liverpool and Real Madrid will go toe-to-toe for Mbappe next summer if he continues to ignore PSG’s attempts to pin him down to a new deal before his current terms expire in 2022. Which he probably will. Both Liverpool and Real are said to be in regular contact with the France star’s people and Real would have moved for Mbappe this summer had Covid not ruined their plans.

Real is said to be Mbappe’s dream and should they make a serious play for the forward next summer, it is hard to imagine him going anywhere else. But should Real dick about, then Liverpool will apparently step in.