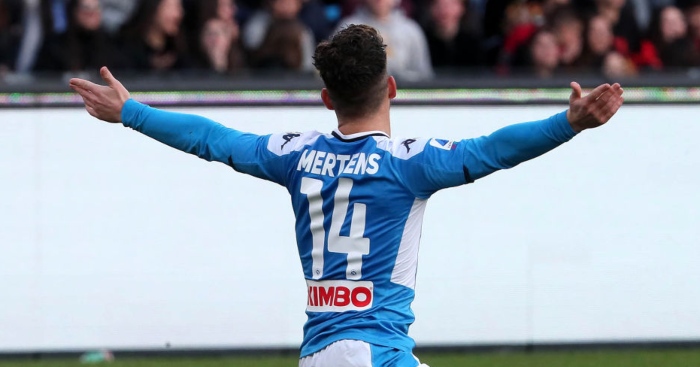 MERTENS IN DEMAND
The word from Italy is that Dries Mertens wants £110,000 a week and that is not on offer at Napoli, which ‘alerts’ everybody in England, obviously. Chelsea, Manchester United and Arsenal are all possible destinations mentioned by the Daily Mail as the Belgian ends a seven-year spell with the club.

Whether Chelsea and Man Utd will retain their interest in Mertens beyond the panic of January remains to be seen. And the smart money is of course on him joining Inter Milan along with everybody else.

SPURS TO MOVE FAST
The Express are calling it ‘a potential £120million injection of youth and pace’ and who are we to argue with the Express, who say that Jose Mourinho is on a mission to make his defence fast and presumably furious this summer.

They talk about Ruben Dias, the Benfica centre-half with an £80m buy-out clause which will definitely not be met by Daniel Levy but then suggest Nathan Ake as an alternative at around £40m. No fellas, that was the Chelsea clause price; he will definitely cost north of £50m.

And they also mention Norwich’s Max Aarons at £15m and Nice’s Youtef Atal at £25m so we presume the ‘potential £120million injection of youth and pace’ comes from adding the Dias, Aarons and Atal fees together. They mention Ben Chilwell too but don’t even take a guess at the fee. Anyway, it’s money and speed. Money and speed.

HEY MKHI, YOU’RE NOT SO FINE
Forgot he existed, didn’t you? It seems that Arsenal will have Henrikh Mkhitaryan back at the club this summer unless they drop their £20m asking price for the Armenian. It seems that Roma are not prepared to meet that figure for a 31-year-old out of contract next summer. Funny that.

Mkhitaryan has scored four goals in ten Serie A games for Roma but has missed half the season through injury. Arsenal that.

AND THE REST
Chelsea, Aston Villa and Newcastle all want Wigan left-back Antonee Robinson…Liverpool will offer Neco Williams a new contract…Willian Jose and Barcelona still want each other so bad.