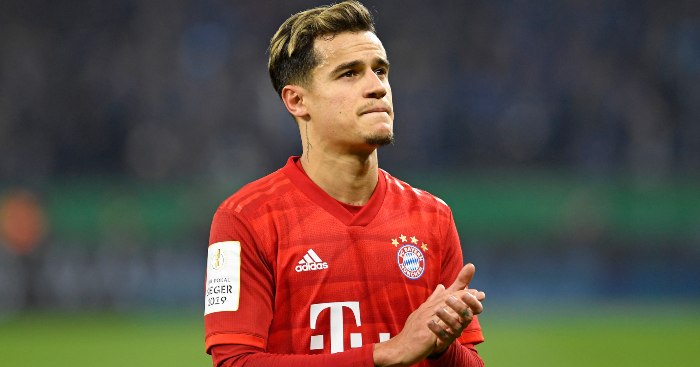 UNITED BACK IN FOR COUTINHO
Yesterday, it was Chelsea being linked with Philippe Coutinho. Today, Manchester United’s turn has come around once more…

Coutinho is currently approaching the end of his year-long loan at Bayern Munich and Barcelona are starting to wonder what to do with him. The Brazilian flopped so hard at the Nou Camp that Barca aren’t bothered about having him back – but he could be useful to the Catalans as they look to raise funds for a spending spree of their own on Neymar and Lautaro Martinez.

Bayern would consider keeping Coutinho but their option to buy of around £100million isn’t considered to be good value. Mundo Deportivo reckons a Premier League return is most likely for the former Liverpool star, with United said to have made their enquires, while ‘there are even voices in Liverpool calling on Klopp’ to re-sign the 27-year-old.

ITALY KEEPER LINKED WITH PREM SWITCH
Another player being linked with Premier League clubs in an attempt to drum up some interest is Gianluigi Donnarumma.

The AC Milan goalkeeper looks set to be on the move this summer with the Rossoneri unlikely to cave in once again to Mino Raiola’s demands. Donnarumma has only a year remaining on his contract at the San Siro and the prospect of an agreement over a renewal seems appears remote.

So Gazzetta dello Sport mentions Donnarumma as a target for Manchester United, Manchester City and Everton. Which is a little weird since none of those clubs need a new goalkeeper who would expect to be an undisputed No.1.

City could do with some back-up to Ederson; United have a ready-made replacement for David De Gea should they decide to allow the Spaniard to leave; and while Jordan Pickford could probably do with a boot up the arse, that won’t come from Donnarumma.

The most likely destination for Donnarumma would be PSG, but they would prefer to wait for the 20-year-old to become a free agent.

LIVERPOOL IN RUNNING FOR RENNES STAR
There seems to be more genuine interest in Eduardo Camavinga. The Rennes midfielder has caught the eye of all the big-hitters and Sport reckons Liverpool are among the clubs to have registered an interest in the 18-year-old.

The Spanish publication talks up Barcelona’s interest most prominently but the Catalans are wary of being pulled into a bidding war for a teenager who could fetch around £50million this summer. Camavinga is described as a ‘Yaya Toure-type midfielder’ – but Barca won’t pay over the odds.

It is suggested that Liverpool or Real Madrid would be more willing to meet Rennes’ demands, with Tottenham’s name also chucked in there because, why not?

AND THE REST
AC Milan will offer £35million for Real Betis star Nabil Fekir… Chelsea and Liverpool apparently want Pierre-Emerick Aubameyang… Atletico Madrid are keen to extend Thomas Partey’s contract and double the midfielder’s release clause to £92million… Man City and Chelsea are being linked with Juventus midfielder Miralem Pjanic… Lille defender Gabriel Magalhaes is again mentioned as an Everton target… Inter Milan are only interested in a cash deal for Lautaro Martinez… Real and Barca are both interested in Bayern Munich defender David Alaba.