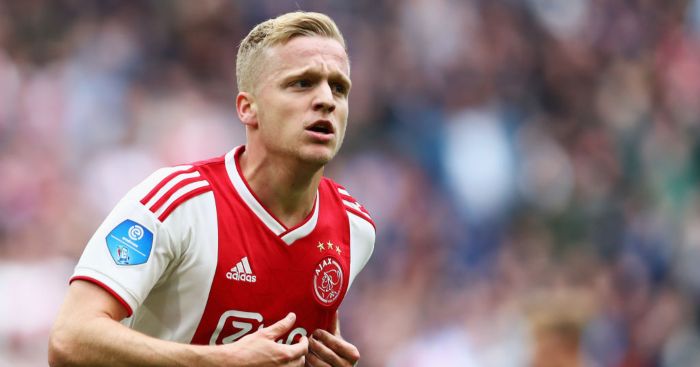 UNITED WAIT FOR VAN DE BEEK OPPORTUNITY
Following Scott McTominay’s abduction in the 3-3 draw with Tottenham which took place in the murky depths of Matt Stead’s imagination on Sunday, it seems Manchester United are looking for another midfielder…

Marca reckons the Red Devils haven’t given up on Donny van de Beek. The Ajax star has had a deal lined up with Real Madrid for the best part of a year yet still he remains in Amsterdam with the transfer some way from being complete.

Apparently, Real had the agreement in place last summer but they failed to sell any of the players who they hoped would provide them with the funds to land Van de Beek. No one wanted James Rodriguez at that price and Gareth Bale stubbornly refused to be dragged off the Madrid golf courses.

That deal is still on the table for the upcoming transfer window – whenever that might open – but we know Real are easily distracted. So if they won’t give Van de Beek his big move then United are first in line to step in.

BELLINGHAM UNDECIDED BETWEEN FOUR CLUBS
United were hoping that they might have another midfielder in the bag after last week. Jude Bellingham was at Carrington on Friday where he apparently met Ole Gunnar Solskjaer, Ed Woodward, Matt Judge and Sir Alex Ferguson. Reports have suggested that Mick Hucknall, the spirit of George Best and an actual red devil were also there to greet the teenager but we haven’t yet been able to verify those claims.

But The Sun says Bellingham is still undecided over where his future lies. United have agreed a fee with Birmingham of £15million up front with another £15million in add-ons potentially taking the deal up towards £30million. Quick maths.

But so too have Bayern Munich and Borussia Dortmund, while Chelsea also have skin in the game. Whichever club wins the race to give the youngster his first professional contract, Bellingham can expect his salary to increase 700-fold from his current terms of £145 a week.

ARSENAL EYE WEST HAM DEFENDER
United are also said to be interested in Issa Diop but the talk this morning around the West Ham defender is all focused on Arsenal.

The Metro seems to think that Mikel Arteta is looking for a centre-back comfortable defending one-versus-one to allow the rest of the Arsenal team to charge forward with gay abandon, and Diop could be that guy.

Diop has been linked with United since the dark days of Jose Mourinho but they were quoted silly money last summer and Arsenal’s interest will likely strengthen the Hammers’ resolve to make a packet on the defender they signed from Toulouse in 2018 for £22million.