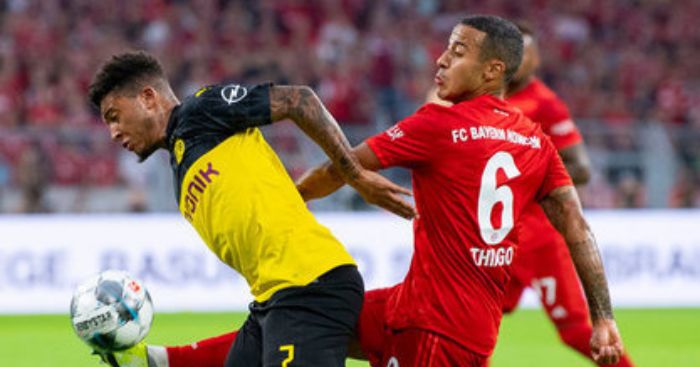 Man Utd have put their pursuit of Jadon Sancho ‘on hold for a year’ due to the costs. Arsenal want Liverpool target Thiago.

SHOCK AND INDEED HORROR
It turns out Borussia Dortmund weren’t messing around. They were prepared to do business when it came to Jadon Sancho, but only before August 10. Man Utd decided they were big and bad enough to ignore that deadline. They were not.

As a result, their Sancho pursuit is ‘on hold for a year’. The Sunday Mirror do the bidding of Ed Woodward by listing the ‘unrealistic’ £108m valuation, the extra £100m in wages and agent fees that ‘would also shatter the club’s pay structure,’ and the overall belief that the transfer market and salaries ‘will reset’ this summer as a result of the global pandemic.

Either that or Sancho has an incredible season and his price rockets further while Man Utd run Daniel James into the ground.

Simon Mullock even includes a line about how the executive vice-chairman ‘has worked hard to get the highest wage bill in the Premier League under control over the last 12 months’.

His exclusives are not always watertight, mind.

Ole Gunnar Solskjaer ‘will be disappointed’ and Man Utd understand Real Madrid, Barcelona, PSG, Liverpool and Chelsea will all be interested next summer, compared to the ‘free run’ they had this time around. Time to look at those alternatives again.

ADAMA LEAVE
Adama Traore might be worth a look, with Nuno Espirito Santo deciding he would rather sell him than Raul Jimenez ‘to raise his own transfer funds’.

Wolves ‘are tightening the purse strings’ and have told the ‘frustrated’ manager to get creative when it comes to increasing his budget. The Sunday Mirror say he is ‘desperate’ to keep Jimenez ‘but is prepared to listen to offers’ for Traore.

Man Utd have been tentatively linked before but Liverpool and Manchester City are the favourites. Both consider Traore to be ‘an impact player’ and Wolves hope to attract ‘substantial bids’ for him. They feel they already have an ideal replacement in Daniel Podence.

Traore has been valued as high as £70m or so in recent months yet we are told that Wolves ‘now rate him at more than double’ the £18m they signed him for in 2018. That’s pretty vague.

THI OFF
In the strangest news of the weekend, Liverpool could miss out on Thiago Alcantara to Arsenal.

The Mail on Sunday report that the Gunners ‘have checked on’ the midfielder and could capitalise on the ‘reluctant’ stance shown by their Premier League rivals, who don’t fancy paying £23m and ‘high wages’ for a 29-year-old who can discuss leaving as a free agent in January. They have Georginio Wijnaldum anyway.

Arsenal are also unlikely to match the demands of Bayern Munich and Thiago himself, but the departures of Lucas Torreira and Mo Elneny could open this most bizarre of doors.