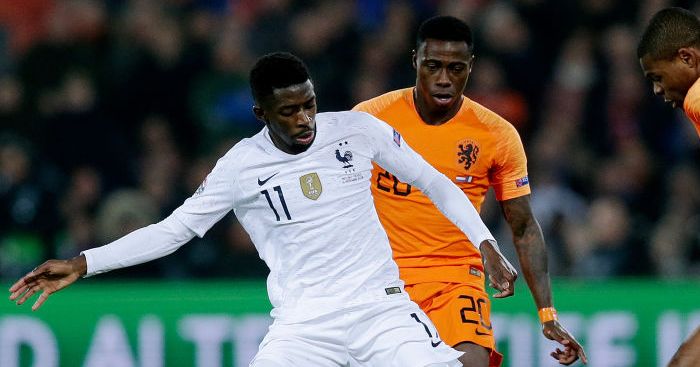 OUS LINE IS IT ANYWAY?
The most recent claim across the journalistic board is that Jadon Sancho might have to put in a transfer request to force the hand of Borussia Dortmund. The problem with that is that they really do not seem to care, safe in the knowledge that he has three years left on his contract and they don’t have to sell.

Manchester United, therefore, will return to that long list of alternatives. But they have a new name to add: that of Ousmane Dembele.

ESPN suggest ‘informal talks’ have been held between United and Barcelona over the winger. Sancho remains their primary target but Barca are ‘open to offers’ and ‘an initial season-long loan with an obligation to buy’ has been mooted.

Dembele’s agent ruled out a move to Liverpool in June, so this would be something of a comedown. Back in July, it was suggested the Frenchman would be available for as little as €60m. That cannot have changed too much.

A PROMES BETWEEN FRIENDS MEANS NEVER HAVING TO GIVE A REASON
Arsenal are shopping in a slightly less extravagant market, although arguably one just as good. Quincy Promes, with 16 goals and five assists in 28 games for Ajax this season, would be a great signing.

His price would be £25m, according to The Sun, who point out that Liverpool have been linked before. That bodes well.

They even quote a source as saying: “Quincy would go in a heartbeat. It would be a great move for him – and Arsenal.” Lovely.

CHAMBERS OF SECRETS
The only possible problem could be money but Arsenal have a solution: sell yer man Calum Chambers.

It is The Sun again – we know, sorry – who claim Fulham could sign their 2018/19 Player of the Year on a permanent deal this summer. Scott Parker is ‘keen’ to work with him again.

Arsenal ‘are unlikely to stand in the way’ if the Cottagers make a bid of around £12m, which would go towards Mikel Arteta’s planned rebuild. We just about spared Chambers in our five Arsenal players to ditch, but it makes sense.