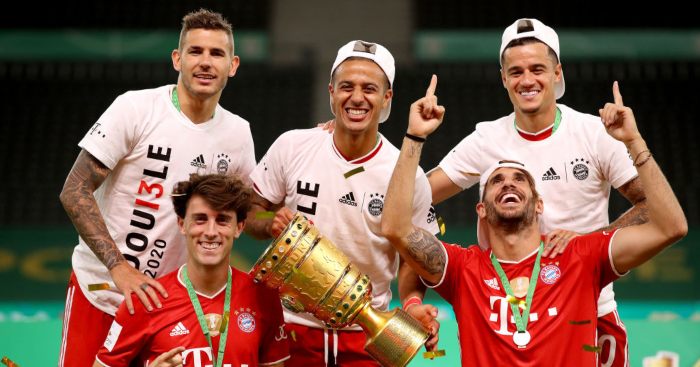 Man Utd are edging closer to signing their top target, while Thiago is no longer on Liverpool’s radar…

MAN UTD CLOSE IN ON SANCHO
Manchester United have been given a “positive sign” in their pursuit of Borussia Dortmund winger Jadon Sancho, according to ‘transfer expert’ Duncan Castles.

Sancho has been consistently linked with a move to Man Utd, with other European giants also said to be interested. Dortmund are asking for €120million for Sancho, who left Manchester City in 2017, but United are said to be unwilling to offer more than £50million this summer.

Sancho scored 17 goals and provided 16 assists as Dortmund finished second in the Bundesliga, behind Bayern Munich this season. And now Castles claims that financial woes could see Dortmund cash in on Sancho.

“It is no secret Dortmund are ready to sell Sancho this summer if the money is right,” Castles said on the Transfer Window podcast (via the Daily Express). “But they have always emphasised that the money has to be right and that it has to be 100million euros or more to sell the player.

“They briefed the German media that they wanted this done by August 10 because they have to sort out their squad for next season. They want to have a go at taking the Bundesliga title off Bayern Munich.

“They are also prepared to give Sancho a new contract if necessary and [Michael] Zorc has already said he doesn’t see it as Sancho has to leave this summer. They are prepared to wait and try to get more in the transfer market the following season. Another thing that is important here is Zorc appears to have briefed that should they get the substantial fee for Sancho then the full amount that they receive will not be spent on new players.

“That’s indicating that they have a hit from COVID like everyone else to deal with and they see some of the Sancho money as being put into their bank accounts to cover for the losses. That has to be a positive sign for Manchester United and supportive of the strategy that we have detailed they are taking, which is to try and bring the price down.”

THIAGO TWIST
Liverpool are not interested in signing Bayern Munich midfielder Thiago Alcantara this summer, according to reports.

The Spain international has been heavily linked with a move to Merseyside in recent weeks with rumours on Wednesday claiming a ‘general agreement’ between player and club has been reached over a summer move. However, that now seems wide of the mark with ESPN claiming there has been a ‘new twist’ in the speculation.

The report claims that Liverpool ‘will not pursue a move’ for Thiago ‘with the Premier League champions only likely to enter the transfer market if a significant member of Jurgen Klopp’s squad leaves Anfield’. Despite Klopp admitting that the club pulled out of a deal for Timo Werner earlier in the summer, ESPN sources add ‘that there is no expectation within Anfield of high-profile arrivals at the end of the season’.

Thiago’s £30m valuation means the 29-year-old is ‘incompatible’ with the club’s current transfer policy with Liverpool going for signings ‘who provide long-term value for money’.

MAN UTD TO RIVAL CHELSEA FOR CHILWELL
Man Utd will rival Chelsea and Manchester City for the signing of Leicester City defender Ben Chilwell, according to reports.

Chelsea have been heavily linked with a move for Chilwell after completing a deal for Timo Werner over the last month, with Frank Lampard meaning business in the transfer window. Reports in early June hinted that the Blues were the main side in for Chilwell but now their interest is said to have gone cold over Leicester’s asking price. And now The Sun reckons Man Utd will provide some stern competition this summer with City also interested.

The Sun says Man Utd have taken ‘pole position’ in the ‘transfer scrap’ for Chilwell after the left-back ’emerged as a major transfer target for Ole Gunnar Solskjaer this summer’. The newspaper doesn’t add much more than the fact it ‘will cast doubt over the future’ of Luke Shaw.

AND THE REST…
Manchester United are close to agreeing a fee with Fiorentina for Italy winger Federico Chiesa…Newcastle plan to rival Manchester United for Chiesa, who is rated at £60m…Manchester City could use Nicolas Otamendi and Oleksandr Zinchenko in a swap deal for Napoli’s Kalidou Koulibaly…Tottenham have offered Chelsea star Willian a huge signing-on fee to join Tottenham…Arsenal face competition from AC Milan, Valencia and Real Betis over a permanent deal for Dani Ceballos…Chelsea are tracking the progress of Monaco’s French winger Malamine Efekele…Leicester are planning a £31m swoop for Real Madrid forward Luka Jovic…Kevin De Bruyne plans to stay at Manchester City even if their two-year Champions League ban is upheld.