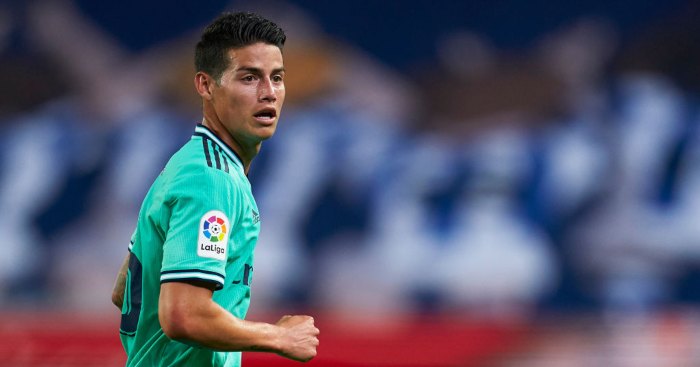 Man Utd like the look of a Real Madrid midfielder, while Chelsea have been given ‘the green light’ to move for Kai Havertz…

MAN UTD AND WOLVES IN FOR JAMES
Man Utd and Wolves are ‘willing to make an effort’ to sign Real Madrid playmaker James Rodriguez, according to reports in Spain.

The Colombian has played just 13 times for Los Blancos this season, not helped by injury issues after returning from a two-year loan at Bayern Munich last summer. He has been linked with a move to Manchester United fairly recently with Real president Florentino Perez reportedly willing accept ‘less than €30m (£26m)’ for Rodriguez.

And now rumours of a move to the Premier League have emerged again with Marca (via Sport Witness) claiming that Rodriguez’s future is ‘far from Real Madrid’ and that Wolves and Man Utd are ready to land a cheap deal. With his contract expiring next summer, the 28-year-old has the ‘upper hand’ as he can speak to other European clubs from January.

The ‘logical thing’ to do would be to sell Rodriguez – who they bought from Monaco for £63m in 2014 – as soon as possible with the possibility that they could lose him for nothing next summer. That means that Real president Florentino Perez will be ‘practically obliged’ to lower his asking price from €45-50m to €20-25m.

HAVERTZ BOOST FOR CHELSEA
Chelsea have received a boost in their pursuit of Bayer Leverkusen attacker Kai Havertz, according to the Daily Express.

Havertz’s string of impressive performances for both Leverkusen and Germany have put the 21-year-old on the radar of some of Europe’s top teams. Chelsea have long been linked with a move for the seven-cap midfielder with reports hinting that the Blues have a clear path to signing Havertz.

Speaking recently on Chelsea’s reported interest in Havertz, Frank Lampard said: “No, no bids have gone in. He’s obviously a top player, but I’m certainly not going to comment on other players at other teams. And it cannot be our focus. So, nothing to say.”

However, the Daily Express claims that Chelsea have now been given ‘the green light’ to pursue a deal for Havertz with Leverkusen having an agreement ‘that they will allow him to leave after helping them qualify for the Europa League’. Havertz ‘only wants to move to the Premier League’ and won’t consider any offers from elsewhere with Man Utd and Liverpool also linked in the past.

The Blues have already brought in Hakim Ziyech from Ajax and Timo Werner from RB Leipzig this summer and Havertz would be ‘the jewel in the crown’ for Chelsea and Lampard.

PARTEY TIME AT THE EMIRATES
Arsenal are willing to sell one of three players this summer to raise funds for Atletico Madrid midfielder Thomas Partey, according to the Daily Mail.

The Gunners’ engine room is considered an area of relative weakness, with Granit Xhaka and Lucas Torreira often failing to provide adequate cover for a vulnerable defence. A recent report indicated that Arsenal are the ‘best placed’ side to land Partey as their wage offer would be three times the amount he currently earns at Atletico, with Napoli also understood to be interested.

The Daily Mail claims that Arsenal are ‘likely to sell Matteo Guendouzi, Alexandre Lacazette or Lucas Torreira to raise the funds required to sign’ Partey. The Ghana international is ‘keen’ on joining up with Mikel Arteta’s men, while the Spaniard ‘has him marked down as a key arrival’.

The transfer ‘has been approved’ but ‘Arsenal’s finances means it will take some time to be confirmed’ with the club only able to spend if they sell this summer.