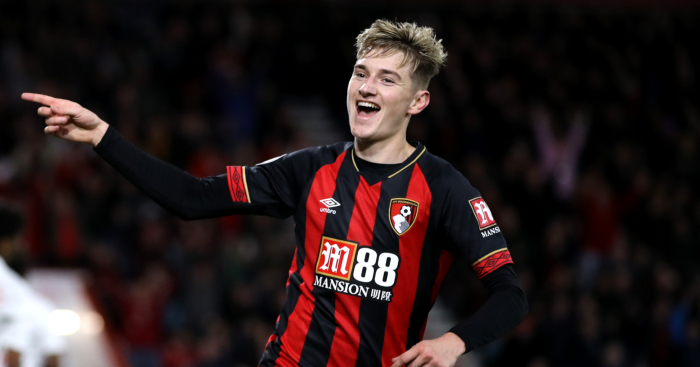 The MEN reckons that should United fail to land their preferred centre-forward and right-wing targets, then they’ll be going back to the south coast to plunder Josh King and David Brooks.

King was a late addition to United’s wishlist in January but Bournemouth wanted in excess of £30million for the former United reserve-team striker. The Red Devils opted to pursue Odion Ighalo instead but an extension to his loan deal appears unlikely, let alone a permanent move.

United will be in a stronger position this summer since King is entering the final year of his contract and the Norwegian has spoken of his wish to one day return to Old Trafford.

Brooks is said to be an alternative to Jadon Sancho. The Wales midfielder hasn’t played this season due to a serious ankle injury but coronavirus has seemingly given him in an unexpected opportunity to audition for a big move. So COVID’s not all bad…

AS has claimed that United could also rival Arsenal for Thomas Lemar should Sancho be out of reach.

CITY EYE BAILEY AS SANE REPLACEMENT
Manchester City are also thinking about contingencies for their wide positions. They would prefer Leroy Sane to commit to a new deal but that appears unlikely to happen, especially while Bayern Munich are hanging off him.

Should they lose Sane, the Daily Mail claims City are looking towards Germany for a replacement. Leon Bailey is reported to be their primary target with the Bayer Leverkusen star thought to be available for around £40million – similar to the price Sane might fetch.

Pep Guardiola is said to appreciate Bailey’s versatility and his ability to play off either flank. The 22-year-old has scored five goals in 17 Bundesliga appearances so far this season.

TOFFEES WELL SHORT OF ALLAN AGREEMENT
Everton have had to rethink their grand plans for this summer but, according to reports in Italy, Allan still features among them.

The Brazil midfielder has fallen out of favour since Carlo Ancelotti left Napoli and Il Mattino reports that his former boss is ready to spend £40million to reunite with the 29-year-old. But, apparently, Napoli want over £60million for Allan, who played only 14 minutes in the last six Serie A matches before the season was suspended.

The Daily Mail says Everton have also submitted a £25million offer for Barcelona defender Jean-Claire Todibo, who is currently on loan at Schalke. The Toffees urgency is prompted by the queue of clubs said to be sniffing around the 20-year-old.

The Toffees have also been linked with Jeremie Boga and Ancelotti may be interested to learn from The Guardian that Chelsea have opted against exercising their buy-back option on the Sassuolo winger.

AND THE REST
Barcelona could recall Philippe Coutinho immediately from his loan at Bayern Munich having offered the Brazilian to Chelsea, Arsenal and Tottenham… Mauro Icardi is close to a permanent move to PSG for around £54million… Arkadiusz Milik is hoping to join Juventus but Napoli will have to lower their £36million valuation… Real Betis are eyeing five loan or permanent deals with Barcelona with Ansu Fati, Carles Alena, Riqui Puig, Junior Firpo and Francisco Trincao among their targets.