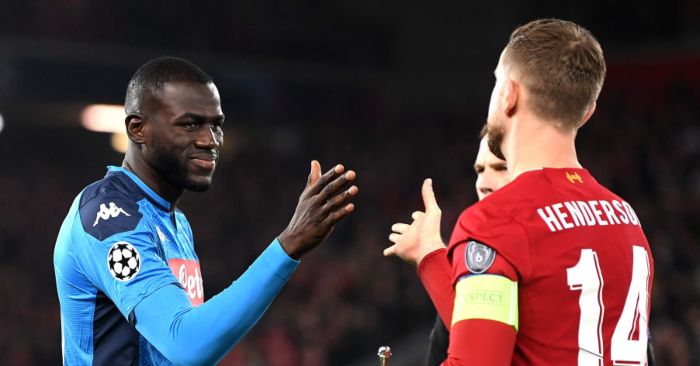 Man Utd are one of three Premier League clubs still after Koulibaly. Liverpool are more interested in departures.

KOUL RUNNINGS
Il Mattino say Man Utd ‘are ready to put on the table an important offer’ for Kalidou Koulibaly, one that ‘could be worth almost 100 million euros’. The deal would be dependent on United selling Chris Smalling to Roma.

All this is ‘according to British media’, namely the Daily Mirror.

And so over there we go. They claim Koulibaly is ‘prepared’ to go and phoned club president Aurelio De Laurentiis to inform him he was ‘willing to leave’ this summer, but ‘would stay at Napoli if a suitable offer was not received’.

Who do they credit? ‘Naples outlet Il Mattino’.

But the trail unfortunately ends there; the article where Il Mattino referred to such a phone call cannot be found. So from going round in circles, we can ascertain that Man Utd still want Koulibaly, and Napoli could sell for £91.5m, according to Il Mattino/the Daily Mirror.

BRIGHT LIGHTS, BIG CITY
There are two known interested parties when it comes to Koulibaly. Everton have been linked, owing to his strong relationship with former Napoli manager Carlo Ancelotti. And Pep Guardiola is keen, too.

Gazzetta dello Sport say Manchester City are ‘‘looking with interest at the situation’s developments’ and whether either Everton, Man Utd or even PSG make a move.

City’s desire to reinforce their defence is known, with Aymeric Laporte’s injury having caused havoc this season. Fernandinho has played at centre-half most of the season, while John Stones and Nicolas Otamendi have predictably struggled.

XHERD ON THE STREET
Liverpool are more interested in shipping players out than bringing them in. The first sale would be of Xherdan Shaqiri, the subject of a loan bid from Galatasaray.

Turkish outlet Fotomac say the Super Lig club want to ‘establish’ their squad for next season. They have targeted Shaqiri before but have never been able to sign him. But his struggles at Liverpool mean he ‘is ready for a new adventure in this part of his career’.

Again, it would be a loan bid. It is suggested that Shaqiri is valued at ‘close to’ £18.3m by Liverpool – although sources at the Merseyside club stated in January it would take at least £25m to prise him away. Jurgen is a big fan.

SHARP DE-CLYNE
Shaqiri could be keeping a 2m distance from Nathaniel Clyne as they both wait at Melwood for confirmation of their moves to Turkey.

This time it is newspaper Posta who claim Besiktas ‘are in the market for a right-back’ as Gokhan Gonul is expected to leave at the end of his contract in the summer.

Besiktas might replace him accordingly. Douglas, he of former Barcelona fame, is a target, but Clyne is far more attainable.

They are already in talks over a pre-contract agreement for a player who was valued at around £15m less than a year ago, but now has months left on his deal and has been forced out of the first-team picture completely due to injuries.