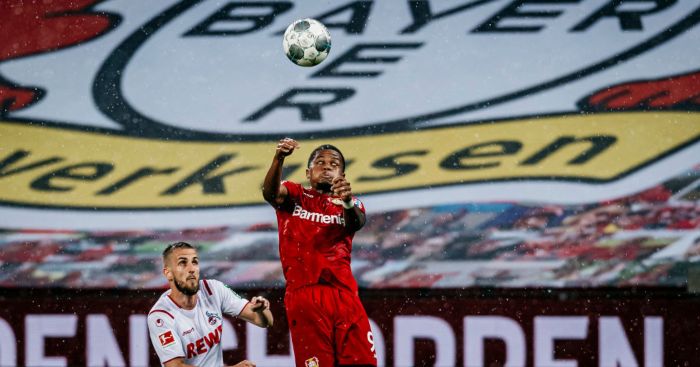 Man Utd are in for yet another Jadon Sancho alternative, while Liverpool are out of the race for a Wolves striker…

BIG GUNS IN FOR BAILEY
Manchester United are ready to speed up their interest in Bayer Leverkusen winger Leon Bailey, according to reports. Jamaican international Bailey is apparently seen as a cheaper alternative to both Jadon Sancho and Jack Grealish, with Bayer Leverkusen likely to ask for just £40m for a player who has scored just five Bundesliga goals this season.

Bailey produced a match-winning display against Cologne on Wednesday, he provided two assists as Leverkusen kept up their Champions League qualification hopes with a 3-1 victory. And the Daily Mail says that will see Man Utd, Chelsea and Manchester City ‘accelerate their interest’ in Bailey with the clubs ‘ready to solidify their interest’.

‘The fact Bailey has Champions League experience is also an attraction for’ Ole Gunnar Solskjaer as he looks to add young, hungry players to his ranks at Man Utd.

LIVERPOOL NOT IN FOR JIMENEZ
Liverpool are not considering a deal to bring Wolves striker Raul Jimenez to Anfield this summer, according to reports.

The Mexican said on Thursday that “it is an incredible thing” to be linked with the likes of Liverpool and Man Utd but stopped short of picking out the team he would like to join. Jimenez joined Wolves permanently for £32m towards the end of last season, and has scored 22 goals in 44 appearances this season.

Those figures have led to interest from a number of clubs around Europe, including Real Madrid, Barcelona and Juventus, but Liverpool now appear to be out of the race, if they were even in it in the first place. Liverpool Echo’s Blood Red podcast (via Sports Mole) claims that the Reds are ‘not prepared to make an offer for the Mexico international’.

Follow the Merseyside derby LIVE with the F365 score centre

SANCHEZ TO LEAVE OLD TRAFFORD?
Inter Milan are interested in keeping Alexis Sanchez around at the San Siro next season, according to reports.

Sanchez joined United in a part-exchange deal from Arsenal, with Henrikh Mkhitaryan moving the other way. But the forward struggled immensely at Old Trafford, scoring just five goals for the club in 45 appearances. He was sent on loan to Inter Milan in the summer but has been unable to establish himself under Antonio Conte due to injury.

However, Gazzetta dello Sport (via Sport Witness) claims that despite his struggles this season, Inter are ‘at work to try and redeem him’. The Chilean’s ‘stock’ within Serie A apparently ‘continues to grow’ after Conte ‘promoted’ him. No doubt the 31-year-old will have to lower his wage demands if he wants to complete a transfer.

NO CHEAP SANE DEAL
Manchester City have reportedly warned Bayern Munich that they won’t get Leroy Sane for cheap this season despite his refusal to sign a new contract.

Pep Guardiola revealed yesterday that the Germany international has rejected an offer to renew his contract at City and will leave the club this summer if a deal can be agreed with another club. Bayern have been the main club linked with a move for Sane reports previously claiming they had agreed terms with the winger.

However, the Daily Telegraph says that the Citizens ‘have told Bayern Munich to forget about trying to sign Leroy Sane in a cut-price £30 million deal’. The report adds that City are adamant they ‘will not entertain any derisory bids and are prepared to hold Sane to the final 12 months of his contract if necessary’.

AND THE REST…
Mesut Ozil wants to see out the final year of his Arsenal contract but the Gunners want to offload the 31-year-old…Chelsea boss Frank Lampard has denied that the Blues will fund moves for Bayer Leverkusen’s Kai Havertz and Leicester’s Ben Chilwell…Roy Hodgson says Crystal Palace would be “very foolish” to relax and think no-one will bid for Ivory Coast winger Wilfried Zaha this summer…England striker Andy Carroll and Spanish defender Javier Manquillo are close to signing new deals with Newcastle United.