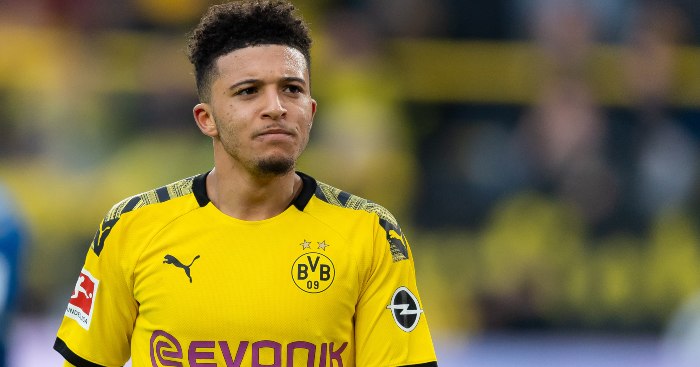 UNITED STILL LEADING SANCHO CHASE
It’s been a week or two since the last stories were circulated about Manchester United’s confidence of signing Jadon Sancho. So this morning’s report in the Telegraph is perhaps overdue…

It’s the usual line we’ve read time and again: United believe they are at the front of the queue for the England winger and they are willing to pay around £100million.

Should Ed Woodward find an agreement with Borussia Dortmund – he’ll have to be quick since the Mirror says PSG and Real Madrid are also eyeing Sancho – then personal terms should not be a problem since United are willing to pay the teenager more than £200,000 a week.

REDS AND UNITED IN THREE-WAY FIGHT
The Express trots out the Sancho line too as part of their report of a three-legged battle between United and Liverpool to take place this summer.

United are best placed for Sancho but Liverpool’s interest is emphasised more strongly and it is claimed that they might yet have a say.

It’s a similar story with Timo Werner with the roles reversed. United are keen on the RB Leipzig forward but everything points to Liverpool being strong favourites to land the 23-year-old. The only trump card United might hold is the reduced competition for places in their attack, compared to Liverpool’s front three, but Jurgen Klopp seems to have this race won.

The third scrap between the Manchester and Merseyside giants will see the winner take home Jude Bellingham. United were all set to pay around £30million for the Birmingham teenager in January but they never got the deal done. That has given Liverpool the opportunity to pounce, while Manchester City are also watching from afar wondering whether to wade in.

LEICESTER LINE UP CHILWELL REPLACEMENT
Another player set to have clubs clamouring to sign him this summer is Ben Chilwell.

The England left-back is wanted by half of the big six, with Chelsea, Tottenham and Manchester City all keen to land the 23-year-old.

Leicester aren’t keen to sell with a return to the Champions League on the horizon but similarly to the Harry Maguire situation last summer, there is a figure at which they would do business.

In which case, Brendan Rodgers will want a replacement and the The Times reckons Charlie Taylor could be that guy.

Apparently, the Foxes have been to watch the Burnley full-back numerous times and they are ready to divert a chunk of their Chilwell windfall in the direction Turf Moor.

AND THE REST
Man City keeper Claudio Bravo has an offer to move to NYCFC… RB Leipzig want to keep Man City’s on-loan left-back Angelino but fear he will be too expensive… Everton’s scout in Italy says the Toffees “know what to do” over Napoli winger Hirving Lozano… Leicester are keen on Odsonne Edouard but Celtic are willing to offer the forward a new contract… Palace and Wolves are on alert after Allan Saint-Maximin’s fall out with Newcastle boss Steve Bruce… Chelsea target Alex Telles has rejected a contract extension at Porto… Aston Villa and Inter Miami are both interested in Daniel Sturridge… Wolves defender Dion Sanderson is attracting Premier League interest.