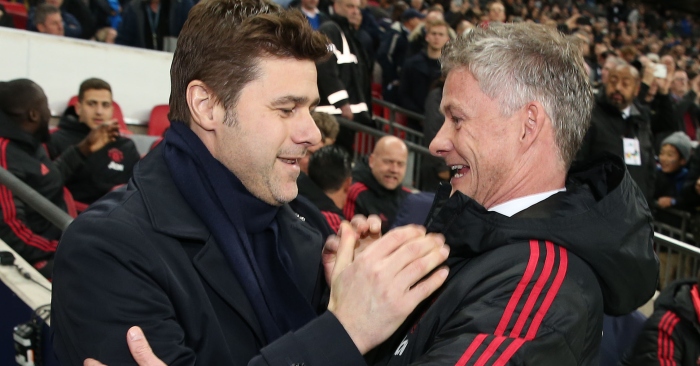 Mauricio Pochettino is ‘the most wanted man in Manchester’.

That’s according to the Mirror, who ‘exclusively’ announce that Poch is wanted by both Manchester United and Manchester City.

Both clubs have started the season poorly, with each recording a solitary victory from their opening three Premier League games and succcumbing to an embarrassing defeat a piece: City lost 5-2 to Leicester; United were spanked 6-1 by Tottenham.

Ole Gunnar Solskjaer is the man more under pressure, with on field issues he is in control of made worse by off field decisions he isn’t.

United didn’t sign any of the players on Solskjaer’s shortlist this summer, instead landing Edinson Cavani and Alex Telles on deadline day, having already secured the signing of Donny van de Beek a month previously.

A separate Mirror report suggests Ed Woodward, who is twice described as United’s ‘supremo’, has ‘privately insisted he would be sentiment aside for the future of the club’.

Woodward ‘knows that it would be like shooting Bambi’, but club officials are said to be aware that Pochettino won’t be available forever. They’ve really got their ears to the ground, those club officials. They also bloody love venison, apparently.

Their counterparts at City are also admirers of the Argentinian coach, and see him as a potential successor to Pep Guardiola, whose future at the club remains far from certain.

The Spaniard said at the start of the season that he would be open to extending his stay in Manchester beyond this fifth year, but his destiny ‘continues to be a regular subject of conversation amongst the players’.

The Mirror suggest Guardiola’s ‘dour body language’ is an indicator of his intention to leave City, but the fact this is the longest period he has spent at any club is maybe more of a guage than slumped shoulders and a frown.

Sources close to Pochettino revealed this week the 48-year-old has refused several job offers and is waiting for the “right project that will allow him to fully utilise his experience and abilities on the big stage”.

Either Manchester job would surely tickle that fancy.

Liverpool may still dip their toes in the lower transfer pool of the EFL to find themselves a goalkeeper this month.

The man on their radar is reportedly Jack Butland, who has been pretty woeful for Stoke for quite a while now.

Even the Mirror, who report Liverpool’s interest in Butland, claim the Reds would be ending his ‘Stoke City nightmare’ if they were to make a move.

England’s youngest ever international goalkeeper is now second choice at the bet365 Stadium but remains one of the club’s highest paid players. Stoke would bite Liverpool’s grasping little hands off.

Swansea are said to be ‘expecting a bid’ from Tottenham before the end of the domestic EFL window, but the clubs are some way off in terms of their valuations.

Spurs want to pay around £7million, while Swansea hope for a bid in the region of £18million.

The Daily Star claim Gareth Bale could be the key to landing Rodon because – you guessed it – he’s Welsh, but The Sun suggest Brendan Rodgers is also keen on the 22-year-old.

The report says the Foxes will make a bid for the centre-back, but are hoping to wait until January to make their move.