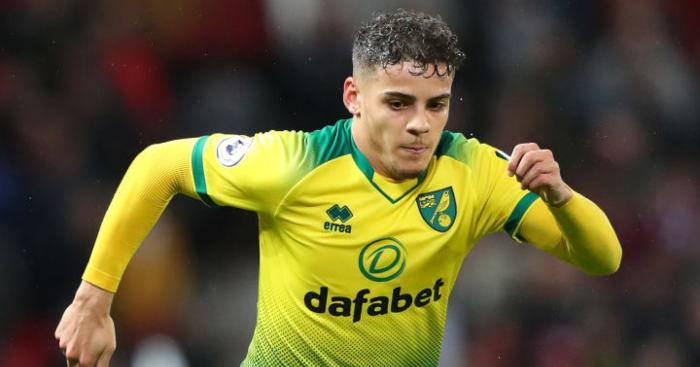 UNITED TARGET NORWICH FULL-BACK
A season and a half after spending around £50million on a right-back (the weakest link in a title tilt?), Manchester United are eyeing another…

Reports this Transfer Window Eve morning suggest the Red Devils have reignited their interest in Norwich defender Max Aarons. They, along with all the other big hitters, were watching Aarons last season, with Spurs having had a £30million bid rejected by Norwich, while Barcelona were also snubbed when they put forward a loan-to-buy offer.

The Sun reckons United are now ready to make a move with the defender, who turns 21 next week, now valued at closer to £20million after the Covid crisis. But Ole Gunnar Solskjaer may wait until the summer. Regardless, Aarons would reportedly ‘jump at the chance’ to move to Old Trafford.

READ MORE: What each Premier League club needs in January

LIVERPOOL EYE SERIE A DEFENDER
Liverpool’s need for a defender is rather more urgent. John Aldridge certainly seems to think so.

Jurgen Klopp’s centre-backs have been dropping like flies this season, with Virgil van Dijk, Joe Gomez, Fabinho and Joel Matip all crocked at various points. The champions have supposedly targeted a steady stream of stand-ins in the past couple of months and one of those links has resurfaced this morning.

Gleison Bremer was mentioned by the Liverpool Echo as a possible January recruit back in November and Corriere Granata is just following up now. The Torino centre-back is also being eyed by Everton and Fulham, with all three clubs said to have made enquiries over the 23-year-old last summer before Liverpool had a problem.

WOLVES JOIN BARCA IN RACE FOR REDS STAR
Klopp is also concerned over the growing prospect of losing Georginio Wijnaldum.

The Liverpool midfielder is mere hours away from being able to talk to European clubs about a pre-contract agreement as the clock ticks down to the expiry of his contract this summer.

Barcelona have been most prominent in the whispers over Wijnaldum’s future, while Inter Milan are also said to be keen.

Gazzetta dello Sport also puts Wolves in the mix, while The Mirror suggests Wijnaldum as a replacement for Joao Moutinho, who still has a year and a half remaining on his contract at Molinuex, and the Portugal star isn’t showing many signs of slowing down just yet.