United have 'concerns' over Lindelof. Not enough to stop them throwing 'multi-million dollar contracts' at Martinez. 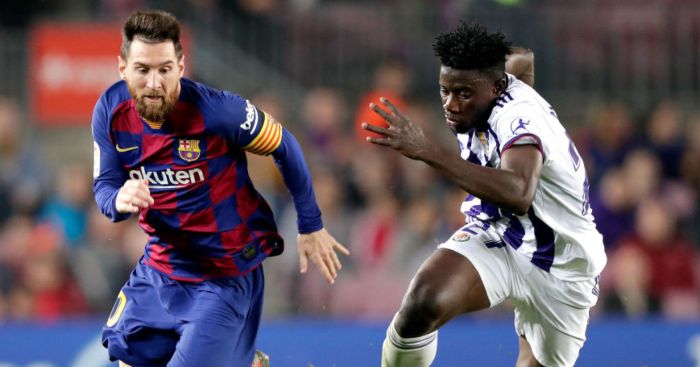 Man Utd have ‘concerns’ over Victor Lindelof. Not enough to stop them throwing ‘multi-million dollar’ deals at Lautaro Martinez.

IF THE MAN UTD WILL NOT COME TO MOHAMMED…
For those who look hard enough, there are some awfully tempting release clauses floating around on the current market. Chief among them could be that of Mohammed Salisu, who is theoretically available for as little as £10.6m.

The centre-half has been almost completely ever-present for Real Valladolid – missing just 64 minutes – this La Liga season. His club is battling relegation but have conceded as many goals as fourth-placed Real Sociedad, and just two fewer than leaders Barcelona.

So he’s pretty good, pretty young at 21 and pretty available with two years left on his current contract. And Man Utd find that pretty tempting, having made ‘enquiries’ over the availability of Juan Mata’s father’s client.

He is one of an unspecified number of defenders Man Utd have asked about as they look to ‘provide more competition’ for Victor Lindelof. ESPN report that ‘there are concerns’ about the Swede’s form and ‘intermediaries and agents have not been discouraged from pitching centre-back targets to the club’.

Lindelof won’t be leaving, having only recently signed a new deal of his own. But Ole Gunnar Solskjaer wants to find the ideal partner for Harry Maguire soon.

DOLLAR BILL, Y’ALL
Not that he will ignore his desire to improve the attack. ESPN add that Solskjaer ‘is intent on strengthening’ that area and Spanish newspaper Sport believe all the money has been thrown in one particular direction.

It is universally accepted that Lautaro Martinez will either join Barcelona this summer or stay at Inter Milan. Yet Man Utd are one of two clubs to offer ‘multi-million dollar contracts’ to the forward.

They were quickly rejected by a player desperate to play in the Champions League and similarly eager not to play in France at all. Real Madrid have also considered an approach for Martinez but did not want to risk the ramifications of losing to Barca. An attempt by Man Utd to ‘convince’ him to look anywhere but the Nou Camp was always doomed in much the same way.

BARCE HOLE
But Barca are understandably reluctant to start spending £98.1m in the midst of a global pandemic and potential economic crisis. So they will drag that price down by offering Inter their choice of player makeweights.

Sport are back to tell us that while Inter ‘have not been ready to include players in the deals’ before, that might have changed. And the six on offer are Samuel Umtiti, Junior Firpo (of former Liverpool linkage fame), Nelson Semedo, Arturo Vidal, Rafinha and Jean-Clair Todibo.

Barca are ‘desperate’ to crack Inter’s ‘tough negotiating stance’. This might be the way to do it.

AND THE REST
Chelsea have opened talks with Leicester over Ben Chilwell, 23, with the England left-back keen on a move to London… Chelsea are also interested in French left-back Fode Ballo-Toure, 23, from Monaco as a cheaper alternative to Chilwell… Chelsea, Manchester United and Juventus have shown an interest in Fiorentina and Italy forward Federico Chiesa, 22, who is valued at around £60m… Sergej Milinkovic-Savic could leave Lazio during the summer transfer window and Manchester United are poised to land the 25-year-old Serbian midfielder if he does.