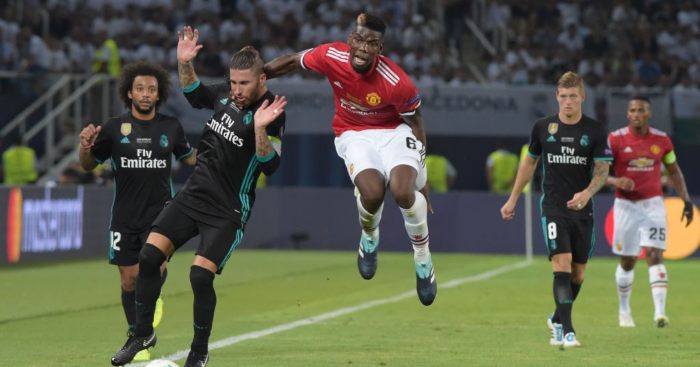 A potential ‘wage row’ at Real Madrid has ended their interest in a Man Utd player, while Liverpool have sent a warning to RB Leipzig…

‘WAGE ROW’ SEES DEAL ‘CRUMBLE’
Any hopes Man Utd midfielder Paul Pogba had of joining Real Madrid now seem to be over after the latest report in the Daily Mail. Pogba tried to force through a move to La Liga giants Real last summer with his former club Juventus also thought to be interested.

That move never materialised with Pogba spending a good chunk of this campaign on the treatment table after suffering a setback to foot surgery earlier in the season. Solskjaer is now looking forward to pairing new signing Bruno Fernandes and Pogba in Man Utd’s midfield, with the Daily Mail indicating that Real’s hopes of a move appear to be over. ‘Desperate’ Real have been looking at including up to four players in a deal to bring Pogba to the Bernabeu.

The newspaper claims that Pogba’s hopes ‘crumble’ due to the potential ‘wage row’ his arrival would create. The Man Utd midfielder would demand wages of ‘£15m per year’ and Los Blancos fear it would create ‘serious dressing-room discontent’. Sergio Ramos and Casemiro ‘would lead the complaints’ with their potential new contracts yet to be announced as the club slash costs.

LIVERPOOL WARN LEIPZIG
Liverpool have warned RB Leipzig that they must consider lowering their asking price for Timo Werner or they will look elsewhere, according to reports. 90min claim that the Reds are reluctant to pay his release clause of ‘just over £50m’ with speculation that a ‘deal could be dead’.

However, 90min claims that ‘Liverpool have simply fired Leipzig a warning that they will not be pressured into triggering his release clause’. Barcelona forward Ousmane Dembele is seen as a ‘likely alternative’ to Werner with Liverpool ‘not afraid to look elsewhere’.

The report continues: ‘Liverpool are eager to pay around £40m for Werner this summer and hope that the threat of pulling out of the deal, coupled with the fact that his release clause will drop to £36m in 2021’.

REAL WANT SAKA
Arsenal youngster Bukayo Saka has become a target for Real Madrid, according to reports in Spain. The 18-year-old has had a breakthrough season for the Gunners with 10 assists and three goals in all competitions.

Don Balon call Saka ‘one of the great discoveries of the Premier League’ this season with Real looking on with interest. The La Liga outfit are keen to buy a left-sided winger this summer, who ‘can compete with Ferland Mendy next season’. And Real president Florentino Perez ‘believes he has found a footballer who can assume that role without problems’ in Arsenal’s Saka, who has also been linked with Liverpool recently.

With Saka’s current contract due to expire in 2021, Real see an opportunity to launch a €30m bid for the Englishman later this year.

AND THE REST…
Chelsea could move for Villarreal star Samuel Chukwueze, if they fail in a bid for Jadon Sancho this summer…Arsenal have reportedly been told that they must fork out €30m if they want to secure the services of Lille centre-back Gabriel Magalhaes…Paris Saint-Germain have made an offer worth €60million for Lazio star Sergej Milinkovic-Savic…Groningen right-back Deyovaisio Zeefuik is the subject of growing interest from teams in the Premier League, Bundeslgia and Ligue 1…Antonio Rudiger is trying to convince Timo Werner to join Chelsea ahead of his other suitors…Vincent Kompany has turned down the opportunity to return to Manchester City…Paris Saint-Germain and Inter have reached an agreement over the transfer of Mauro Icardi…Brighton have made enquiries about Middlesbrough winger Marcus Tavernier…Crystal Palace have set their sights on 19-year-old Reading forward Danny Loader.