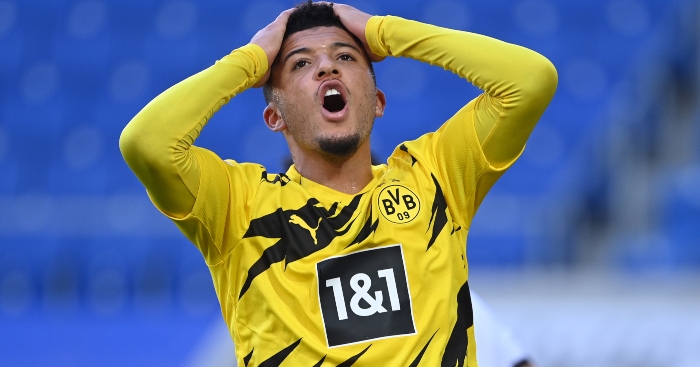 UNITED TO GO BACK FOR SANCHO

Manchester United, apparently, have a plan to sign Jadon Sancho. Another one…

After getting their summer-long pursuit of the Borussia Dortmund winger so badly wrong this year, 90min reckons the Red Devils intend to strike early in 2021.

United recognise that getting Sancho to Old Trafford in January would be nigh-on impossible but that doesn’t mean they can’t get a deal wrapped up well in advance of the European Championships, when it is feared that the winger would attract other suitors. Perhaps clubs who have the faintest idea of how to act in the transfer market.

The story goes that United want to sign Sancho in a similar deal to that which took Christian Pulisic to Chelsea. The USA star put pen to paper in January 2019 before spending the rest of the season at Dortmund.

The United goalkeeper is reported to have been told that he would be England No.1 by now if he weren’t picking splinters at Old Trafford. Henderson returned to the Red Devils in summer to fight for the No.1 spot, a battle he appears to have lost.

Henderson wants a loan move to further his international prospects and, apparently, United are prepared to grant him one.

But where? Premier League clubs are all set in the goalkeeping department but Celtic are mentioned as a possible destination. United would also be willing to consider an 18-month loan deal to sweeten the deal for any club wary of changing their keeper mid-season.

READ MORE: Frozen out: The players yet to make a Premier League bench

As if to emphasise just how broke they really are, Barcelona are being linked with a move for Shkodran Mustafi.

The Arsenal defender is out of contract next year and RMC Sport is telling us all that Barca could cobble a few euros together for the German in January.

Mustafi isn’t their first choice for a defensive recruit in the New Year. That is said to be Antonio Rudiger, but the centre-back is tied to Chelsea until 2022.

So if they can’t prise Rudiger from Stamford Bridge, then Barca’s next target is Mustafi.

There truly is hope for us all.