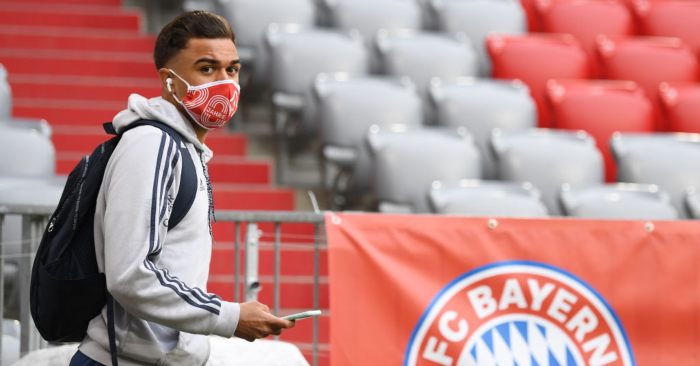 Corentin Tolisso could be available for around a quarter of a Sancho. And Barca may take a £100m hit on Coutinho…

DORTMUND’S DEMANDS PUT UNITED OFF SANCHO
There has been a lot of talk in recent weeks of Manchester United scouring the market for alternatives to Jadon Sancho. Perhaps now we know why…

According to The Telegraph, Borussia Dortmund are willing to let the England winger leave this summer – but only for £115million.

It has been said that United are wary of being seen to be lavishing vast sums on the transfer market while the Covid-19 fall-out continues. It’s a stance which conveniently keeps the club’s cash in the Glazers’ pockets but United are reported to be keeping their powder dry for now while everyone figures out just what the hell is going on this summer.

RED DEVILS MORE WILLING TO PAY THE TOL
Surprisingly, Corentin Tolisso seems to be available for a price which seems entirely reasonable, even in the current climate.

The midfielder is reported to be looking to quit Bayern Munich this summer following an inconsistent couple of seasons which have been ravaged by injury. The 25-year-old has managed only seven Bundesliga starts this term and he could have played his final game for the Bavarians since he is currently sidelined with an ankle injury.

But, according to RMC, that won’t discourage United from making a move if he is available for around £30million. Apparently, the Red Devils have already engaged in talks with the former Lyon star’s representatives to broker a deal, but they have competition from Inter Milan.

One of best midfielder I play with, i think will be perfect for machester United. Hope he goes there. https://t.co/n8ei3SEyfe

PREM TRIO IN FOR CUT-PRICE COUTINHO
One player definitely heading for the Bayern exit is Philippe Coutinho. The on-loan attacker has had a reasonable season on loan in the Bundesliga, but Bayern allowed their option to purchase the Brazilian for £107million to expire last month.

Barca still want rid of Coutinho and their asking price has already been slashed a couple of times. Initially it was said they were looking for £80million; now they may accept just £45million – almost a £100million hit on the fee they paid Liverpool in January 2018.

That new figure has had the desired effect in attracting new interest. According to France Football, Tottenham, Everton and Newcastle are all sniffing around Coutinho. Indeed, Newcastle are said to have begun negotiations with Coutinho’s crew while they wait for their takeover to be ratified. If it ever will be…

AND THE REST
Wilfried Zaha is a target for PSG…Southampton could offer Ryan Bertrand a new deal to fend off interest from Leicester…The Foxes are also considering a move for Vitesse defender Max Clark as a replacement for Ben Chilwell…Ryan Fraser has turned down Bournemouth’s final contract offer and will leave at the end of the season…Santi Cazorla has made a decision on his future but is not revealing it as his contract at Villarreal reaches its expiry.