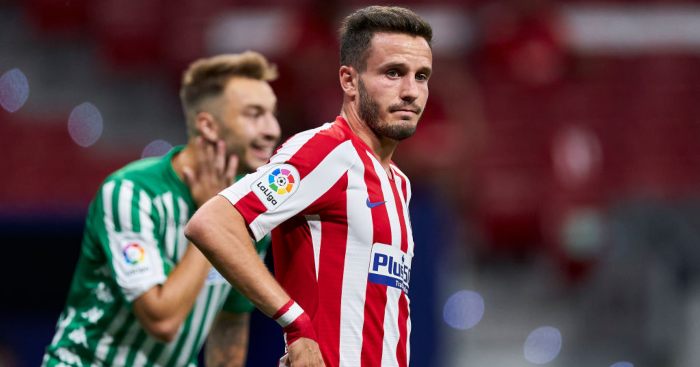 Man Utd are reviving their interest in a previous transfer target, while Arsenal ‘fear’ they could miss out on three targets.

BETTER CALL SAUL
Man Utd are set to revive their interest in Atletico Madrid midfielder Saul Niguez, according to reports.

Atletico stalwart Saul was said to be the ‘object of desire’ for Man United earlier this year as the club looks to reinforce their midfield options, while they were heavily linked over last summer’s transfer window. The midfielder has contributed seven goals, but no assists, for Atletico this season in 44 matches in all competitions.

And now the Daily Star claims that Ole Gunnar Solskjaer is ‘prioritising’ Saul as well as a move for Borussia Dortmund winger Jadon Sancho, although that deal seems increasingly dead in the water. Man Utd will ‘revive their interest’ after they ‘failed’ to do a deal last summer for the ‘£70m-rated midfielder’.

Saul is understood to be ‘considering his future’ in Spain as he is concerned that he will ‘fail to win the biggest trophies’ if he stays at Atletico any longer. The Red Devils ‘would be willing to hand Niguez a long term deal worth £150,000-a-week’ with the Spaniard ‘disillusioned’ in Madrid.

The prospect of playing alongside Bruno Fernandes and Paul Pogba apparently ‘appeals to him’.

ARSENAL ‘FEAR’
Arsenal are worried they will miss out on other key targets despite sealing a deal for Willian on Friday, according to reports.

The Gunners completed the signing of the 32-year-old yesterday on a three-year deal as Mikel Arteta looks to build his own squad at the Emirates. However, The Sun claims that Arsenal ‘fear they could miss out on other targets’ as ‘hopes of other quick deals’ fade.

Arsenal are keen to bring in Atletico Madrid midfielder Thomas Partey but the Spanish club are refusing to budge of his £45m asking price, while the north London club ‘are also in danger of missing out on Lille centre-back Gabriel Meghalaes’. Napoli looks like the Brazilian’s most likely destination this summer.

And they’ve ‘not made any progress in talks’ over a deal to bring Dani Ceballos back on loan for another season after he returned to Real Madrid. Arsenal are looking to sell several players this summer but Arteta ‘could be forced to lower his sights in terms of  potential new recruits’ if they don’t offload them quickly.

AND THE REST…
Former Tottenham manager Mauricio Pochettino had already held talks with Barcelona before their Champions League exit. The La Liga giants are expected to sack Quique Setien…Manchester United loanee Odion Ighalo does not want to join Paris Saint-Germain…Newcastle have joined the race for revitalised Manchester United defender Chris Smalling. His former club Fulham are also keen…West Ham will do battle with West Brom for the signature of Junior Caicara. The £3m-rated full-back has just won the Turkish Super League with Istanbul Basaksehir…Manchester City are not considering a bid for Tottenham midfielder Harry Winks this summer.