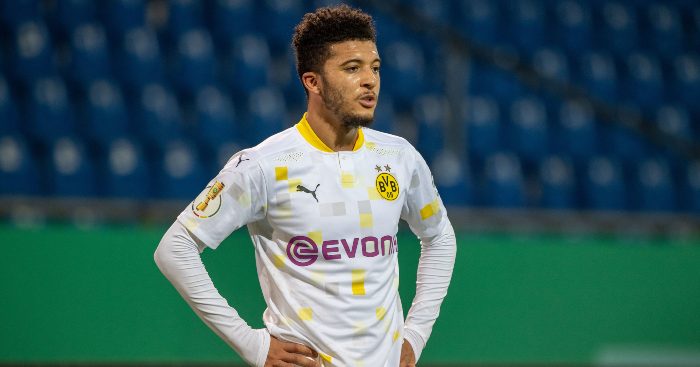 Man Utd are confident of getting a Jadon Sancho bargain, while Liverpool could suffer a financial blow…

SANCHO BARGAIN
Man Utd are confident that they will sign Borussia Dortmund winger Jadon Sancho this summer and in a deal cut-price deal, according to reports.

The German club rebuffed United’s attempts to land Sancho, holding out for €120m (£107m) the Red Devils were unwilling to match.  Dortmund CEO Hans-Joachim Watzke didn’t rule out a future move to Old Trafford for Sancho, claiming Man Utd “misjudged” the situation in the summer.

Sancho has since struggled to rediscover the form that saw Man Utd interest pique in the first place, scoring no goals and claiming three assists in his first 11 games of the Bundesliga season. And now 90min claims that the Red Devils are ‘confident they can now get the England winger for notably less’ than his summer asking price.

The report adds that Man Utd believe their ‘gamble not to give in to Borussia Dortmund’s €120m (£107m) asking price’ will now pay off. The Man Utd board ‘believe they are in a strong position to get a transfer over the line this year and will do so for less than £100m’. Sancho is ‘keen on joining’ the Premier League club and Man Utd ‘are not worried’ by his poor form this term.

90min claims that sources have told them that United ‘believe the ongoing circumstances will push the figure down’ and the Red Devils are ‘eyeing an early deal’ before the start of the European Championship in the summer.

COUTINHO BLOW
Liverpool could be set to miss out on a large chunk of money from the deal that allowed Philippe Coutinho join Barcelona, according to reports.

The Brazil international has struggled to make a big impact since making his £142million move to Barcelona in January 2018 and spent last season on loan at Bayern Munich. Coutinho has won a league title every season since leaving Anfield – but the money secured from his departure helped Liverpool to win the Champions League in 2019 and the Premier League last term.

However, the Daily Star claims that Liverpool  are ‘set to miss out on another hefty instalment’ from the huge deal that saw him leave Anfield. Coutinho is likely to be out for five months after having surgery on an injured knee. The report says that the 28-year-old is ‘now not guaranteed to make the 100 outings that would see Jurgen Klopp boosted by another £18m’.

The Reds have already missed out on £9m after Barcelona failed to win the Champions League in Coutinho’s first two seasons at the club.

AND THE REST…
New Paris Saint-Germain boss Mauricio Pochettino has been linked with two of his former Tottenham players – Dele Alli and Inter Milan playmaker Christian Eriksen…Liverpool have changed their stance on winger Xherdan Shaqiri and will not allow him to leave this month…Arsenal have joined a host of Premier League clubs taking an interest in Celtic midfielder Ryan Christie…Borussia Dortmund are interested in Manchester City winger Jayden Braaf…Arsenal defender Rob Holding is close to agreeing a new long-term contract…Juventus are considering a move for Shandong Luneng forward Graziano Pelle.