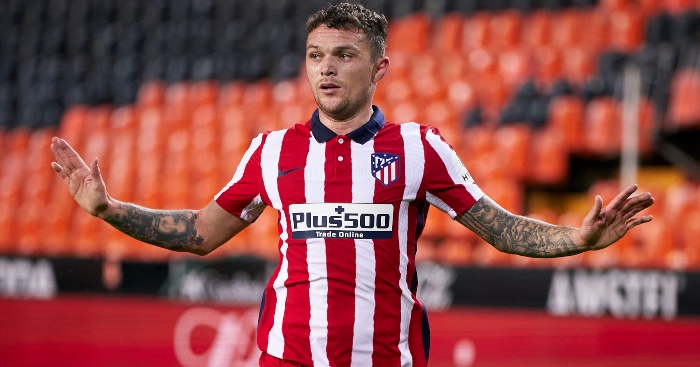 UNITED TARGET TRIPPIER
A year and a half after looking at 804 right-backs before settling on Aaron Wan-Bissaka, Manchester United are said to be on the hunt for another.

The Telegraph reckons that Kieran Trippier is currently at the top of their pile of scouting reports. Trippier moved to Atletico Madrid during the same window United signed Wan-Bissaka for £45million and after rebuilding his reputation which took a beating from an awful final year at Spurs, the England defender has started all ten of Atletico’s La Liga matches this season during which they have conceded only two goals.

Apparently, United are keen to give Wan-Bissaka more competition for his place. The former Palace full-back is one of the best one-on-one defenders in the Premier League and if there is a slide tackle to be made, Wan-Bissaka is your man. Just as long as you don’t need an attacking threat from wide. Which United badly do.

DYBALA DANGLED IN FRONT OF BIG SIX
United are also one of the clubs said to have been offered Paulo Dybala.

The Juventus star was close to moving to Old Trafford last year but at no point did he seem at all keen to join the Red Devils so the deal broke down. Dybala remained at Juve having fought his way back into the side under Maurizio Sarri last term, again he finds himself on the periphery of Andrea Pirlo’s squad having started only six games in all competitions.

With 18 months left on his contract, Dybala’s agents are doing their thing. 90min reckons the Argentina star has been offered to United, Liverpool, Man City, Tottenham, Chelsea and Arsenal, but his reluctance to move to the Premier League previously hasn’t gone unnoticed.

PSG are also said to be in the hunt for Dybala. The Parisians could lose Angel Di Maria next summer, with Juve and Inter interested in the winger as a free agent, according to Calciomercato.

ARSENAL IN REAL TROUBLE
Arsenal fans could do with some good news this morning after Sunday’s miserable derby defeat. But there’s little to be found on the grapevine…

With a gaping creativity void in their midfield, the Gunners have been linked with Dominik Szoboszlai and they are expected to make a move for the Red Bull Salzburg player next summer.

But Bild says Real Madrid have plans of their own for Szoboszlai. Apparently, Zinedine Zidane is eyeing a deal in the new year. Assuming he’s still in charge at the Bernabeu.

John Stones could also play in midfield but the Manchester City centre-back certainly isn’t the answer to Arsenal’s problems. That, though, isn’t stopping Mikel Arteta from pursuing Stones. 90Min says Arsenal are keen to land the defender who is entering the last 18 months of his City contract.