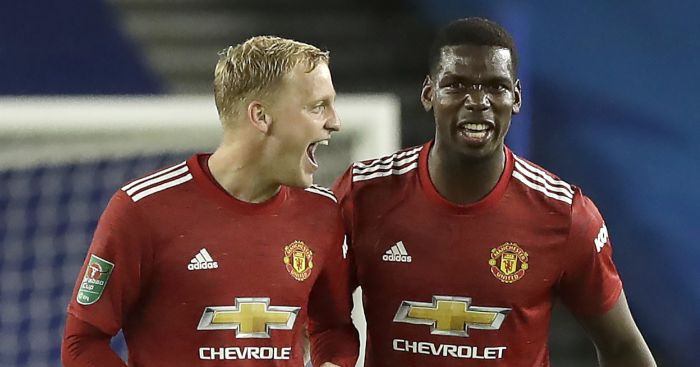 BEEK OFF
There were glimpses of a bright Manchester United future for Donny van de Beek against Istanbul Basaksehir but it remains to be seen if that develops into anything more substantial. The Dutchman has played fewer minutes for the club than Nemanja Matic, Juan Mata and injuries’ Paul Pogba since joining from Ajax.

He really is pushing for what would be a first Premier League start of his career. Van de Beek has made six substitute appearances for Manchester United of anywhere between one minute and 23 in the competition. He is still their only player to score a domestic goal at Old Trafford this season.

Juventus have taken notice of his plight and ‘could try to attack’ the player, which we assume is them targeting him for a transfer rather than Calciomercato warning us of an imminent hit.

They report on a potential loan with an option to buy in a deal that would be ‘easier in the next summer transfer market than in January’. There could also be a potential player exchange as Manchester United and Juve enjoy ‘excellent relations’, while Andrea Pirlo ‘would probably know how to enhance and appreciate it more than Solskjaer’. Miaow.

The purchase option would be for £31.2m. Considering Manchester United signed him for £35m in the first place, it seems unlikely.

OUS A PRETTY BOY, THEN?
It feels like an age since Ousmane Dembele joined the pantheon of players linked with a deadline day move to Manchester United that never came. An injury to Ansu Fati seemed to rule out the prospect of the winger leaving in January but the Premier League side are ‘most insistent’ about their interest.

Sport claim that Manchester United ‘have not abandoned the idea of ​​taking over his services’. But Barcelona’s valuation of around £70m would be enough to put them off and pursue a possible loan instead.

That would be an ‘impossible’ track to pursue given the Spanish side’s injuries. Dembele has started to establish himself under Ronald Koeman in the circumstances, starting four of the last five La Liga games and scoring twice in the Champions League. He won’t be leaving.

SILVA LINING
Nor will Thiago Silva, whose one-year deal is certain to be extended by Chelsea in due course. It contained an automatic option of another 12 months that the Blues will undoubtedly activate after he helped remind them about the virtues of defending.

While ‘official discussions’ will not take place ‘until the new year’, Frank Lampard is so enamoured with the Brazilian’s impact at Stamford Bridge that he is desperate to keep him for as long as possible. Sky Sports do seem fairly confident.

Silva has had an excellent season thus far. Joe Cole was not the only one who got it wrong.