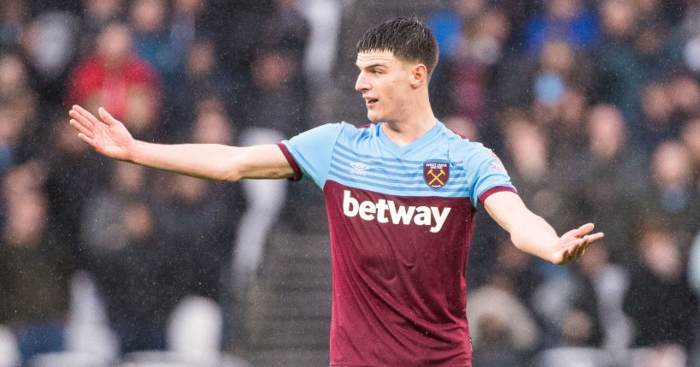 Declan Rice is hot property, with Manchester United the latest club to be linked. But then they want everybody…

RICE OR NOODLES?
West Ham are willing to sell their most valuable asset Declan Rice, with a £70m fee being mentioned by all parties as the Hammers prepare for what The Sun call a ‘massive squad overhaul’. So who will buy? The Daily Telegraph talk about Chelsea, who let Rice go from their Academy when he was just 14 but have regretted it ever since. But they also add the name of Manchester United, and that theory was backed up by a Hammers insider on Monday night.

Hello mate. Yes the Manchester clubs have always had an interest as do Chelsea too. They would be silly not to. The only thing that has changed recently is the financial situation although club would still demand a large fee to even consider selling https://t.co/daDvSOBfre

We were struggling to work out why Chelsea would spend £70m on Rice last month, and now we are at a loss to understand why United would target Rice at that kind of price. If he is worth £70m then what is Wilfred Ndidi worth? The depressing answer is probably ‘about £30m’ because he is not English.

LIVERPOOL LINKED WITH VICTOR
This should be taken with a massive pinch of salt as the source is French gossip-mongers Le10Sport (who were claiming Liverpool contact with Kylian Mbappe two days ago) but their latest ‘exclusive’ is that Liverpool are leading the race for Lille’s Nigerian striker Victor Osimhen, scorer of 13 Ligue Un goals this season at the age of just 21.

Clearly, they are doing the bidding of either Lille or Osimhen as they basically claim that Manchester United and Chelsea are also interested in Osimhen and that the price would be at least £60-70m. Does everybody cost £70m these days?

CHIESA ON TOAST
The third name to be linked with Manchester United is Federico Chiesa, the Fiorentina winger who could be a cheaper alternative to Jadon Sancho at just £61m. The 22-year-old Italian international scored six goals and claimed five assists for Fiorentina before the season was abandoned.

La Gazzetta Dello Sport also credit Chelsea with an interest but it is thought that Chiesa would prefer to stay in Italy, even though the wages on offer at Old Trafford would be much higher.