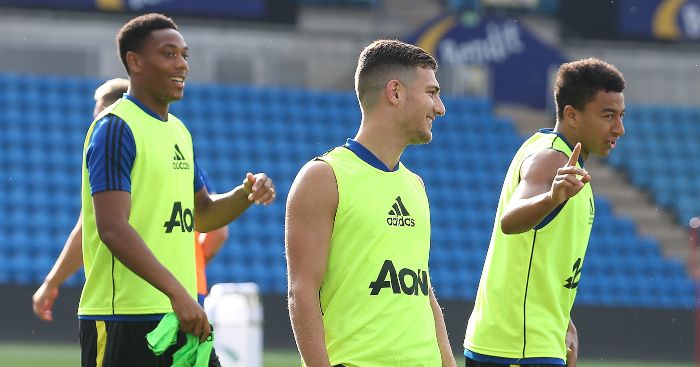 Manchester United want a bit of cash. But if Jesse Lingard ‘could fetch the biggest fee’ of six, that doesn’t really bode well.

THE JOY OF SIX
“I am going to be successful here and there are players who won’t be part of that successful team but many of these do have it,” said Ole Gunnar Solskjaer after watching his Manchester United side suffer a 4-0 defeat to Everton in April 2019.

One starter and one substitute from that fateful day have since left: Romelu Lukaku and Ashley Young. The rest have either bucked their ideas up or are, according to the Daily Telegraph, not long for this club.

They report that United ‘will listen to offers for six players’ as they look to boost their own transfer budget this summer. Alexis Sanchez, Chris Smalling, Marcos Rojo, Phil Jones, Jesse Lingard and Diogo Dalot are all in danger.

The only possible number mentioned is the £21m United are attempting to negotiate with Roma over ‘a guaranteed sale’ for Smalling. Most intriguing is the claim that Lingard ‘could fetch the biggest fee’ of the sextet, despite being in the last year of his contract and not currently playing.

Of the others, Rojo is considered ‘surplus to requirements’, Jones ‘can no longer be relied upon’ and will leave ‘if the right offer comes in’, probably from West Ham, while Dalot ‘has struggled to convince Solskjaer and wants regular football’.

It feels an eternity ago since Jose Mourinho was linked with him for £35m.

LOAN RANGER
Sanchez could prove the most difficult to offload. While removing his salary – which United are still paying a percentage of despite him being on loan at Inter Milan – is a ‘priority’ in terms of the wage bill, there are understandably few suitors.

The Daily Mail describe it as ‘a £50m dilemma’. Sanchez does not wish to move to China or the Middle East, immediately ruling out some of the more obvious options. So ‘his refusal to take a pay cut will be a major stumbling block’.

Inter would quite like to take him back next season but ‘are reluctant to commit to a £20m transfer’ and talks over another loan ‘have yet to take place’.

BAYERN SHARES
As United look to get their house in order, so too does Bayern Munich midfielder Thiago. Sport Bild report that his property is up for sale.

Further to that, the German champions ‘would no longer be so unhappy’ about seeing him leave. The club has ‘a great lack of understanding’ as to why Thiago ‘refused to sign’ the contract offered to him despite Bayern acquiescing to his demand for a four-year deal.

Since Thiago made his desire for ‘a new challenge’ clear, Bayern have been more open to selling him. But Liverpool fans can stop celebrating: while they value the midfielder at £18.1m, ‘Bayern expect at least double’.