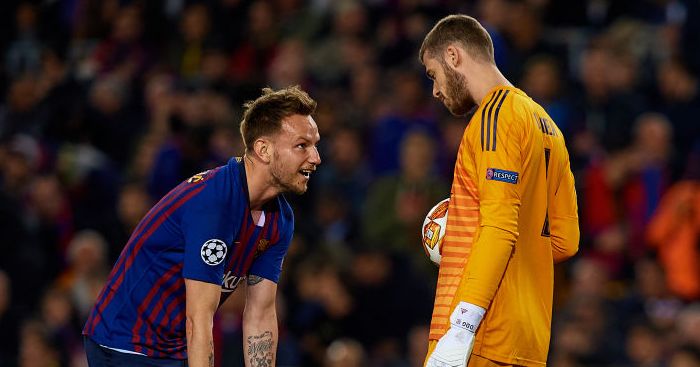 RAKIT SPORTS
While Tuesday evening brought widespread reports of Manchester United having finally agreed a fee with Sporting Lisbon to sign Bruno Fernandes, eggs are not being counted until they hatch specifically at Old Trafford. So alternatives are being considered, too.

And United have clearly taken Barcelona’s attempt to hijack the Fernandes deal to heart, as they are interested in one of the Catalan club’s own midfielders.

ESPN say United ‘have enquired about signing’ Ivan Rakitic, having been ‘made aware’ of his ‘availability’. Although ‘an agreement is not thought to be close’ and Rakitic would be reluctant to relocate his family from Spain, he has been identified as a potential option late in the window.

With a contract that has roughly 18 months left to run, the Croatian would be available for €20m (£16.9m). But Fernandes joining ‘would likely scupper the Rakitic move’. We’re all lucky enough that United are making one January signing, so don’t expect two.

RED CED REDEMPTION
There are few things as fun as a full-back merry-go-round. Juventus particularly love it, letting Stephan Lichtsteiner leave in summer 2018 so they could sign Joao Cancelo, who they subsequently sold a year later in part-exchange for Danilo.

Arsenal, having clearly enjoyed their role after Lichtsteiner’s wonderful stay in north London, are back for more. They want Cedric Soares from Southampton, who are loaning Kyle Walker-Peters in from Tottenham.

The Daily Telegraph say Arsenal ‘will consider a move’ for the European champion this month, as his deal expires in the summer and he would therefore be cheap at around £6m.

The Portuguese ‘has come under consideration’ due to his versatility and experience as he would provide cover in both full-back positions and is actually only 28. It is sensible for everyone.

ENTER SANDMAN
The Daily Mail have clearly not received the memo as they claim that Sheffield United ‘are understood to be the only club who has made an offer’ for Sander Berge. He had a Manchester United medical on Tuesday!

It seems that Chris Wilder is not actually targeting a 15-year-old youth goalkeeper, mind. He wants that bloke who plays in midfield for Genk, could offer up to £27m and will resist attempts from the Belgian club to loan him back this month as he wants the Blades to ‘consolidate their position in the Premier League’.

West Ham had been linked but only Sheffield United have formalised interest with a bid that could ‘involve further add-ons’. They are watching Mady Camara of Olympiakos and Hoffenheim’s Florian Grillitsch too, but Berge is their priority.

AND THE REST
Sheffield United are also in talks to sign 23-year-old Dutch forward Richairo Zivkovic from Chinese side Changchun Yatai… Arsenal will not allow Gabon striker Pierre-Emerick Aubameyang, 30, to leave for less than £50m, amid interest from Barcelona… Poland forward Krzysztof Piatek, 24, wants to leave AC Milan for Tottenham before the transfer deadline… Tottenham are set to complete a deal for PSV Eindhoven’s Netherlands forward Steven Bergwijn, 22, by Wednesday… Tottenham chairman Daniel Levy has set a £10m limit for a deal involving the club bringing in a striker this month… Arsenal remain in talks with Flamengo for Spain defender Pablo Mari, 26… Wolves remain optimistic they will sign Olympiakos and Portugal winger Daniel Podence, 24, before Friday’s transfer deadline.