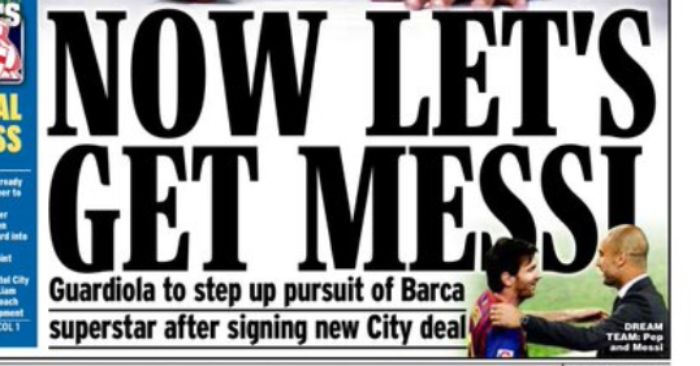 MESS AROUND
While some see only a new Manchester City contract for Pep Guardiola, others read between the lines to find Lionel Messi at the Etihad by next summer. Among them are the Daily Mirror, who describe the club as ‘determined’ to sign the Barcelona captain.

City are now expected to ‘turn their attention’ to Messi and could actually make their move as early as January, but a summer switch is seen as ‘the likeliest scenario’. Every Premier League club should be after him.

But it is City who quite obviously lead that race. They view Messi as ‘the final piece in the jigsaw’ in terms of the Champions League. Will signing him stop Pep #overthinking?

WALES OF A TIME
Another generational forward could be on the move soon enough. Everton would quite like to take Daniel James on loan.

The Toffees had been interested in James when Swansea were fielding offers from suitors in the summer 2019. Manchester United eventually won out but the player has struggled to establish himself as a regular starting option at Old Trafford.

Football Insider suggest Everton could offer a respite on loan after the absence of Richarlison ‘nullified their cutting edge’ recently. Although as they add, it is unclear whether United ‘would be willing’ to farm someone out to a potential ‘top-four rival’.

TAKING THE MIG
Perhaps Everton could look at Miguel Almiron instead? Newcastle ‘are ready to listen to offers,’ if 90Min are to be believed.

The Paraguayan’s agent has already notified a number of clubs of his availability, ‘much to the annoyance of the Magpies’. He also claimed that Almiron would already have left if not for the global pandemic.

Newcastle are ‘annoyed’ at the prospect of their player being hawked around Europe, but they ‘will listen to offers’ and want their initial £20m outlay back.

No Premier League club is said to be interested in the winger, whose only goal or assist in seven Premier League games this season came on the opening day against West Ham as he laid on Jeff Hendrick’s late finish.