Home Gossip Gossip: Liverpool have £45m Werner Plan B ‘in the chamber’ 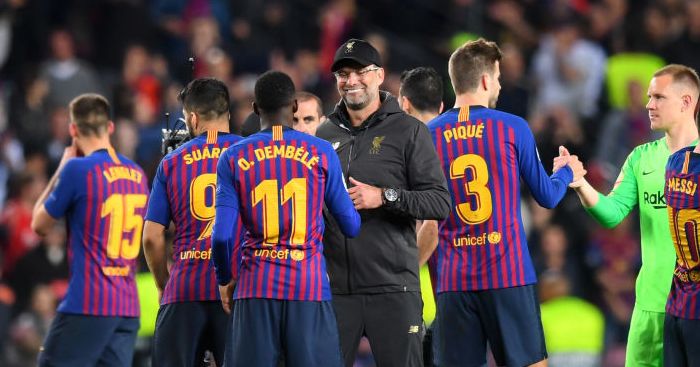 Jurgen Klopp tends not to settle for transfer alternatives. Might Liverpool make an exception when it comes to Timo Werner?

OUS YOUR DADDY?
When Jurgen Klopp comprises a shortlist of transfer targets, it tends to contain one non-negotiable name and nothing more. Liverpool waited an extra six months to sign Virgil van Dijk, for example, while arranging for Naby Keita’s arrival a year in advance.

So take Mundo Deportivo’s claim that Ousmane Dembele ‘reappears strongly’ on the Merseyside agenda as an alternative to Timo Werner. While acknowledging that the pair ‘occupy different positions’, it is said that Klopp ‘has an old aspiration’ when it comes to Dembele.

Those two have never actually worked together. Dembele joined Dortmund in 2017, two years after Klopp had left for Liverpool. Yet the German ‘enjoyed it from a distance shining in his old club’.

Werner is still regarded as ‘the priority’ at Anfield but ‘Liverpool have Dembele in the chamber’ and will challenge Juventus, who want him on loan, for a player Mundo said would cost ‘about €50m (£45m)’ earlier this month.

PHIL IN THE BLANKS
Arsenal have been set a minimum loan fee for Philippe Coutinho, but it seems as though Tottenham lead the race. They are the club that ‘seems most likely to take on a deal’ involving such mammoth wages.

That claim comes from Spanish outlet Sport, who say that ‘no English club’ will countenance the costs of a permanent move, but Spurs are ‘willing’ to cover his pay in exchange for a season of pot shots from outside the box.

BLUES CRUISE
The Daily Express, however, write that Chelsea ‘have emerged as favourites’ to sign the overrated Brazilian.

The Blues ‘have been paying close attention to’ developments with regards to Coutinho’s future, and he fits the bill of Frank Lampard’s desire for ‘a big-name signing’ this summer. Well alright.

LUIZ YOURSELF
While mulling over that news, Arsenal might be interested to hear that David Luiz will need to take a hefty pay cut to join Benfica.

The Daily Mirror believe that the Portuguese club’s wage cap of £32,000 could prove problematic if he wants to return at the end of his current Arsenal deal. For a defender currently on £38,000 a week, that represents a drop of more than half.

Luiz himself has already stated that he and Benfica have held talks, and that he wishes to go back to the club he spent four years at before retirement. Sacrifices will be required, big man.