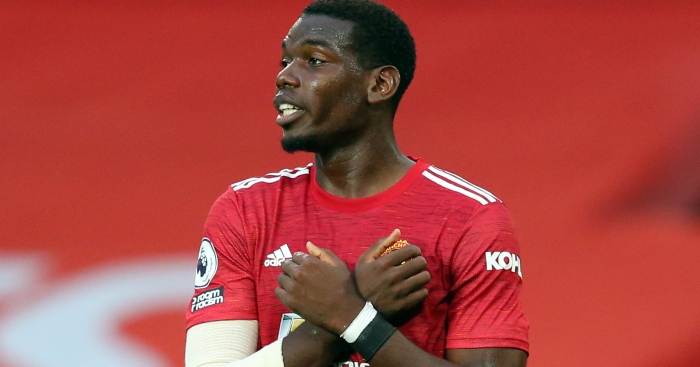 Barcelona are in a bad way financially, which is highlighted again this morning by reports that the club is hoping to negotiate a further 30 per cent wage cut. SER Catalunya says Barca will attempt to convince their squad to do their bit by taking a lower salary in return for a longer contract. Good luck with that, lads.

So it comes as no shock that they are being linked with freebies in the transfer market. David Alaba is one player on their radar, even if Juventus are supposedly the front runners to sign the Bayern Munich defender.

Somewhat more surprising is to see Barca being linked with Paul Pogba as a free agent. Mundo Deportivo suggests the Manchester United midfielder would be ‘interested’ to hear from Barca since his current deal expires next summer. Of course he would be. Pogba would obviously rather be heading anywhere else than back to Manchester today after international duty.

What the story fails to mention, however, is that United have the option to extend Pogba’s terms for another year which they will certainly do, even if they plan to get rid of him next summer. But they certainly won’t give him away.

Paulo Dybala might have been playing with Pogba at Old Trafford had the Juventus forward fancied it last year. But he didn’t so he’s not.

TMW, though, suggests Chelsea are sniffing around Dybala now. Apparently, the Blues hold a ‘concrete’ interest in the Argentina star and could make their move.

Dybala is engaged in contract talks with Juve… and there it is.

Almost as a footnote in the story is a line suggesting that Chelsea also ‘tried for Lautaro Martinez in the summer’ but got nowhere because the Inter Milan forward is holding out for Real Madrid or Barcelona. He’ll be waiting a while for Barca…

With the international break now over, we can expect a few deals to be tied up today…

The biggest is likely to be Said Benrahma moving to West Ham. BBC says the Brentford forward will have a medical having flown back from Algeria duty before putting the finishing touches to a £30million move across London.

Terence Kongolo is also in the capital, with the Huddersfield defender having already had his medical with Fulham. The Athletic reckons the Cottagers will cough up £7million including add-ons for the Dutch centre-back.