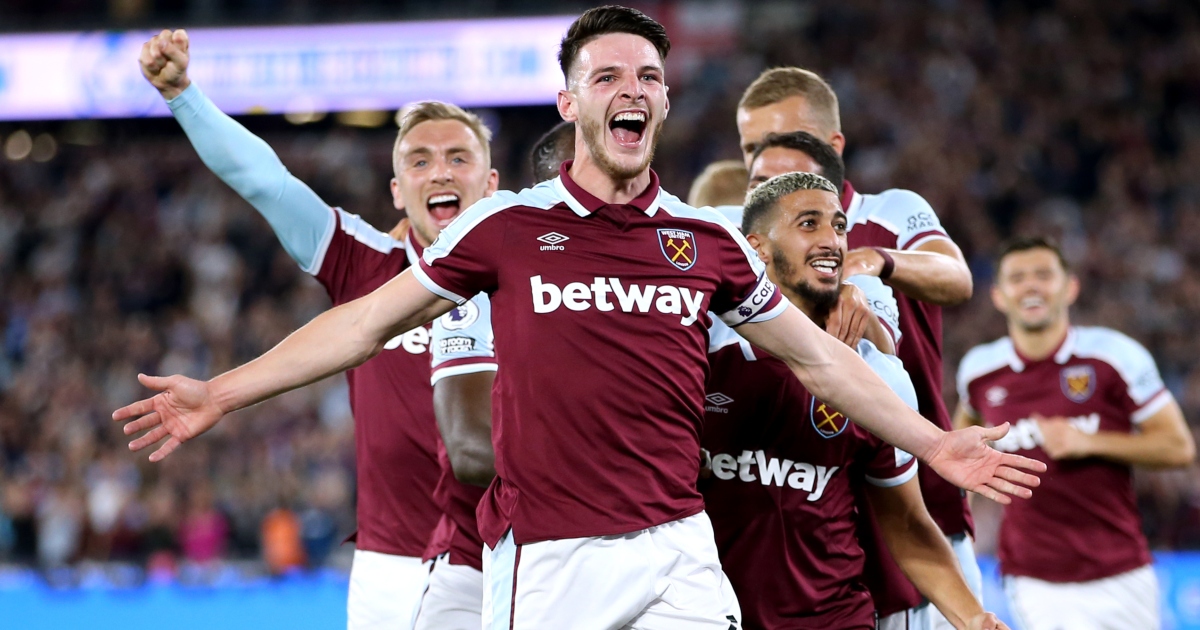 West Ham are unlikely to be too concerned about Declan Rice’s stance, while Chelsea want to borrow Saul…

FRUSTRATED RICE TO REBUFF WEST HAM OFFERS
West Ham supporters are waking up this morning on top of the world and top of the Premier League table after a thoroughly impressive demolition of Leicester on Monday night. The whispers today around Declan Rice are unlikely to burst their bubbles…

The Times reports that Rice is upset to have been priced out of a big move this summer, with the Hammers insistent on any offer they receive being somewhere in the region of £100million.

Gary Neville said on Monday Night Football that he would pay around £50-60million for the England midfielder, and the likes of Manchester United, Manchester City and Chelsea appear to agree that West Ham have overvalued the 22-year-old.

So frustrated is Rice that he plans to rebuff any offer to extend his contract. Which isn’t likely to cause too much panic at the London Stadium given the England international still has three years remaining on his current terms, with West Ham retaining the option of an additional 12 months.

The Manchester Evening News has labelled Rice as United’s ‘dream target’ while they dally around adding a midfielder that they so clearly need. But the prospect of anyone making an offer that might tempt West Ham before the deadline next week appears very slim indeed.

The Red Devils have been keen to bring Eduardo Camavinga to Old Trafford from Rennes this summer, especially with the Ligue 1 club desperate to sell after the France international entered the final year of his contract while refusing to sign an extension.

Indeed, reports in France over the weekend suggested Camavinga had played his final game for Rennes. But ESPN says United are not optimistic of landing Camavinga, with the 18-year-old apparently preferring to stay in France with PSG or move to Spain.

CHELSEA TO CALL SAUL OVER LOAN MOVE
Saul Niguez has also been heavily linked with Manchester United. Liverpool too. But reports this morning suggest Chelsea could move for the Atletico Madrid midfielder before 11pm next Tuesday.

It has been the case for most of the summer that Atletico would listen to offers in the region of £35-40million for Saul, who still has five years remaining on the nine-year contract his signed in 2017. But The Telegraph claims Chelsea are exploring the possibility of a loan move for the 26-year-old.

Without any obligation to purchase, we’re struggling to see how in any way that might appeal to Atletico. And the story acknowledges that Chelsea, like United, would have to shift some of their drifters and deadwood before making any move, even if Thomas Tuchel wants to add a fourth top-class option to his midfield ranks.

ARSENAL OPEN TO AUBA OFFERS
Arsenal too are desperate to trim their bloated squad and wage bill, with a couple of strikers being linked this morning with Emirates exits…

The Telegraph says the Gunners are open to offers for Pierre-Emerick Aubameyang should the captain express a desire to leave the club in the coming week.

Crystal Palace would willingly take Eddie Nketiah off Arsenal’s hands but The Athletic says the two London clubs remain some way apart in their valuations. Palace would be willing to pay around £10million for the forward, but Arsenal are looking for around twice that amount. A compromise seems realistic before the deadline next week.

A couple of players are moving closer to the door: Lucas Torreira is closing in on a return to Fiorentina on loan, while Willian is expected to join Corinthians for free.