One player 'ticks all the right boxes to play alongside Fernandes'. Man United will struggle to get the other. 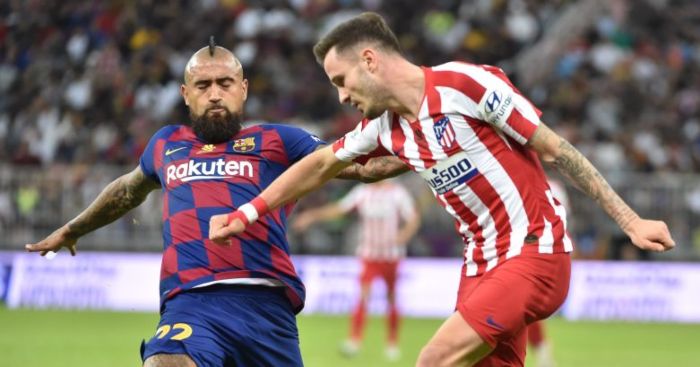 One player ‘ticks all the right boxes to play alongside Bruno Fernandes’. Man United will struggle to get the other.

SAUL IN THE DETAILS
The gossip column rather enjoys the idea that Man United ‘secretly sent scouts’ to Anfield last month. They could have watched Atletico Madrid beat Liverpool from the comfort of their living rooms, or indeed rocked up and no-one would have batted an eyelid. But ‘spies’ had to be sent to ‘make personal checks’ on Saul Niguez. So this is obviously from The Sun.

They would have seen him play well enough: two shots, one key pass, the most touches of any Atleti player, six interceptions, seven clearances and a 65.3% passing accuracy. And they believe ‘he ticks all the right boxes to play alongside Bruno Fernandes’. Rio Ferdinand agrees.

Saul has a £132m release clause that will not be matched by Man United, who ‘would only be willing to pay around £70m’. That, funnily enough, was reported earlier this month. But they hope ‘a bumper pay increase’ from £115,000 to around £200,000 a week will prove tempting.

Atletico would understandably be ‘reluctant’ to sell the 25-year-old academy product. Considering he has more than six years left to run of an initial nine-year contract, that’s fair enough.

MORE VIDAL
Ole Gunnar Solskjaer is clearly focusing on improving his midfield. That is the only reason Man United are still being linked to Arturo Vidal in the year 2020.

It is not good news, mind. Calciomercato claim offers from China and England, with Man United named specifically, ‘do not satisfy the midfielder’. Vidal ‘is convinced only by’ Inter Milan and wants a three-year deal. At 33. Well alright.

For Man United, it’s a blessing in disguise. Barcelona would ‘demand’ around £17.4m for Vidal and matching his current £142,000-a-week deal would be problematic. Still, it’s nice to see him linked to Old Trafford again.

SWAP SHOP
Speaking of Inter Milan and Barcelona, the pair could also do some salacious swapping business.

Gazzetta dello Sport say Inter might use Barca’s interest in Lautaro Martinez to engineer a move for Antoine Griezmann. The former has a release clause of €111m while the latter would be available for a similar amount. The negligible difference in value is tempting for all parties.

Griezmann has also been mentioned concerning a swap deal with Neymar, while Chelsea and Manchester City have both shown an interest in Martinez previously. The 22-year-old could have his pick of potential suitors.

AND THE REST
Barcelona will try to sign Sweden forward Alexander Isak, 20, from Real Sociedad if they fail to land Martinez… N’Golo Kante is part of a three-man shortlist of transfer targets in his position drawn up by Real Madrid… Arsenal and Chelsea will be offered the chance to sign Barcelona playmaker Philippe Coutinho this summer… Manchester City striker Sergio Aguero’s former side Independiente are increasing their efforts to try to bring the 31-year-old Argentine back to the club… Italy forward Lorenzo Insigne, 28, is set to extend his contract with Napoli until 2025.