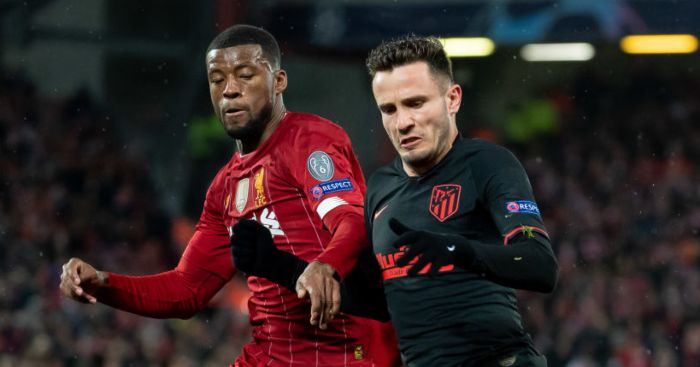 BETTER CALL SAUL
The agent of Saul Niguez insisted earlier this week that he is the sort of player that “doesn’t need anybody to push him”. Don Balon seem not to mind, though, as they insist that he ‘will finally leave’ Atletico this summer.

The midfielder will join Man United for ‘an amount close to €80m’. That equates to roughly £71.2m. Not bad.

The deal ‘will have to be done definitively’ in August but is ‘very close’ to being made official soon. How does that work exactly?

UNITED FRONT
Quite how much stock can be placed in the ‘inside source’ at The United Stand is unknown. Hopefully it’s just Mark Goldbridge with a balaclava and voice distorter.

Whomever it is, they describe reports of Man United wanting Donny van de Beek as “bullsh*t”, call Florentino Luis “a back-up” to Jude Bellingham and claim Jadon Sancho is ‘still 1 million percent’ the priority at Old Trafford.

That would directly contradict reports from the weekend, but the source is insistent that ‘the funds are set aside just for’ Sancho, and while ‘there’s no offer on the table yet,’ negotiations will move properly at the end of the Bundesliga and Premier League seasons.

READ: Solskjaer far from perfect but has earned United faith

CHELSEA DAGGER
Chelsea’s plan to sell up to ten first-team players to fund three more moves could be in jeopardy. If a full-back is leaving for upwards of £60m, Manchester City will never be far behind.

The Daily Telegraph believe the reigning Premier League champions ‘are prepared to join the race’ for Ben Chilwell. He ‘has been considered’ an option if Pep Guardiola decides to renovate at left-back.

And that is a distinct possibility. Benjamin Mendy has failed to establish himself as a reliable starter, Oleksandr Zinchenko ‘could be moved into midfield’ and Fabian Delph is busy endearing himself to the Everton fanbase.

Chilwell would therefore ‘come into Guardiola’s thinking’, but ‘Leicester’s valuation may prove an obstacle’. They reckon he is as good as Harry Maguire was when he was sold for £85m, and City traditionally ‘tend to target players at the £60million to £70million bracket rather than go for record-breaking deals’.