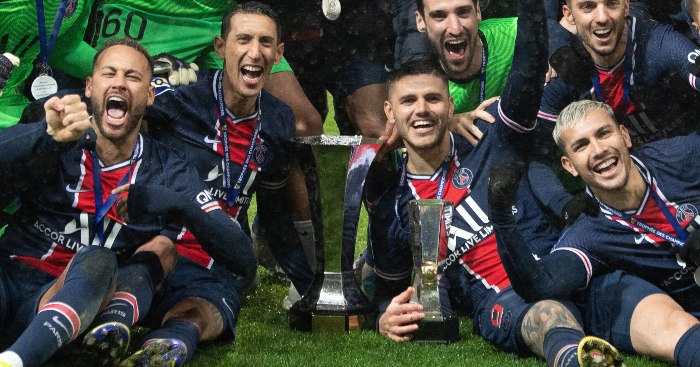 Dele Alli may be the first to make the journey this month, with PSG interested in taking the former England attacker on loan. The player is keen to go and, according to Fabrizio Romano, he is ‘pushing for a move’ but Spurs ‘are not convinced yet’.

Angel Di Maria could make the return journey this summer.

The Argentina attacker is out of contract at the end of the season and Don Balon says Spurs are keen on the 32-year-old. Lord knows he has a point to prove in the Premier League after fleeing Manchester United at the earliest opportunity. Juventus too are mentioned as being interested.

Di Maria, though, is not certain to leave Paris. He has started all four games since Mauricio Pochettino took charge and renewal talks are expected to take place before he can leave for nothing.

F365 Says: Even Mourinho now has to love this Ndombele

PREM QUARTET TARGET SANSON
Spurs are just one of the names chucked in a Daily Mail story about Marseille midfielder Morgan Sanson.

Andre Villas-Boas confirmed this weekend that there is Premier League interest in the 26-year-old: “He is a boy who interests English teams because of his characteristics, and it is possible that something could happen.”

Sanson has missed the last month due to injury but he returned for Marseille’s home defeat to Nimes on Saturday. Just in time for Spurs, Aston Villa, West Ham and Arsenal to make their move this month, according to the Daily Mail.

WEST HAM KEEN TO GET LABORDE ON BOARD
West Ham’s priority this month is the signing of a striker after they sold Sebastien Haller. In a shock to precisely no one, the Ivory Coast forward discovered his form as soon as he arrived at Ajax and in three games, he has scored once and offered three assists – more goal involvements than he managed in 16 games for the Hammers this term.

David Moyes insists the club are trying to sign a replacement. But the problem for Davids Gold and Sullivan is every club now knows they are desperate.

Montpellier could profit as a consequence. The Telegraph says that West Ham are considering a move for Gaetan Laborde, who can play across the front line.

Laborde has scored six goals and recorded six assists for Montpellier in Ligue 1 this term, which is already more than he managed last term. Altogether since joining Montpellier from Bordeaux in 2018, Laborde has 23 League goals in 84 appearances.

Wolves were linked with him last week, while Marseille have also been credited with an interest.

MILIK MOVING TO MARSEILLE
Marseille, though, have set their sights on another forward.

The word according to Fabrizio Romano is that Arkadiusz Milik is likely to head to OM from Napoli. Milik has been mentioned as a target for West Ham but it seems as though Villas-Boas has this one wrapped up.

Apparently, the 26-year-old will join Marseille on loan this month with the French side taking on the obligation to buy Milik for £7million at the end of the season, with another £2.6million in variables.