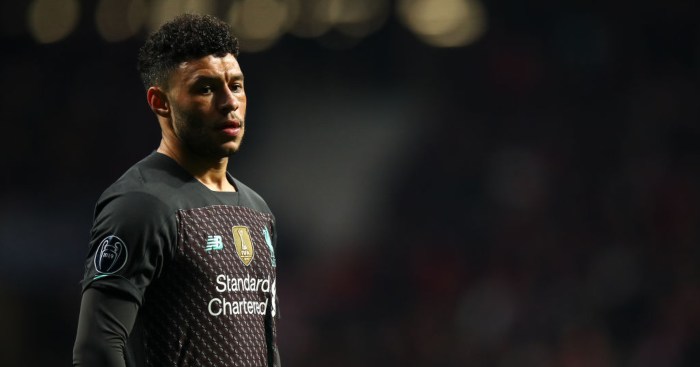 OVERST-OX-ED
The arrival of Thiago Alcantara means Liverpool are rather overstocked in midfield.

The gamblers among us would suggest the latter two, Ox and Jones will be those to miss out more often than not. And the Mirror are suggesting Wolves – with whom Liverpool have done two deals in the last two days – are in talks with the Reds over Oxlade-Chamberlain and could make an offer for the England international.

With Diogo Jota moving to Anfield and Ki-Jana Hoever in the opposite direction, the supply lines between the two clubs have been established, and Wolves are reportedly keen to test Liverpool’s resolve with regard to Oxlade-Chamberlain.

The midfielder moved to the Reds from Arsenal in 2017 for £25million, but has struggled for consistent game time, partly due to injury.

When he has played, he has illustrated that he has a lot to offer, but may wish to move on as he will likely see his importance to the team dwindle even further with Thiago’s arrival on Merseyside.

JOSE FOR J-LINGZ
With Everton now making smart decisons in the transfer market, the Premier League also-rans must be worrying who will pay over the odds for their services in the future.

Despite the return of Gareth Bale and sealing an impressive move for Sergio Reguilon, Daniel Levy is now reportedly looking to cancel out that good faith he has earned with the Tottenham fans by making a £30million move for Jesse Lingard.

The Daily Star claim Jose Mourinho is keen to ‘rescue him from his Manchester United nightmare’. Where he came through the youth system, became a professional footballer and made his name? That nightmare? Sure.

The report claims the 27-year-old was ‘seething’ with Ole Gunnar Solskjaer as he was left out of the Manchester United squad for the Crystal Palace game.

Furthermore, he tried to ‘engineer showdown talks’ with Solskjaer, but found himself ignored.

Fortunately, he still has his admirers, and Mourinho is convinced he can ‘revive his flagging career’. If anyone can… it’s probably not Mourinho, but it’s worth a shot.

F365’s early loser: Ed Woodward, witness to his own incompetence

JAMES SURPLUS
Leeds are set to revive their interest in Daniel James ‘if he becomes surplus to requirements at Manchester United’.

Marcelo Bielsa’s side were close to securing a move for James 16 months ago but the deal fell through at the last minute.

The Welshman signed for United in the summer of 2019 and despite a bright start at Old Trafford, his form has drifted significantly.

He was replaced at half-time in defeat to Palace on Saturday after he failed to make the most of a rare starting opportunity. And he may find those chances increasingly hard to come by in the coming weeks.

Leeds would seem a better fit, and the Daily Star claim they could come back in for the 22-year-old.