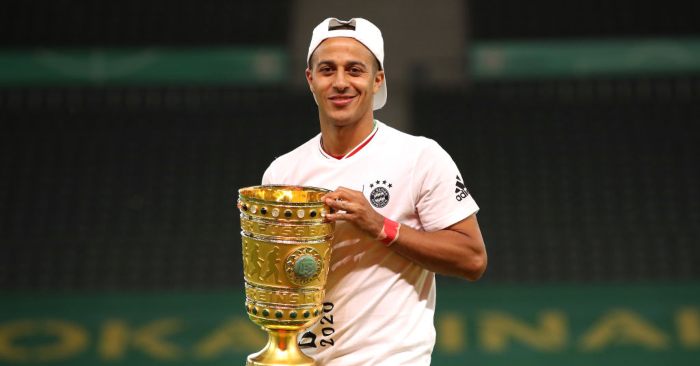 THIAGO ‘DESPERATE’ FOR LIVERPOOL MOVE
Well, he is actually desperate for a move to the Premier League, but Liverpool are undoubtedly interested and the Daily Mail seem to suggest that the deal would work at £32m (he is one of many exciting players who is out of contract next summer) as the Reds as ‘his desire to play in England will help keep any contract negotiations within Liverpool’s understanding of what they should reasonably pay him’.

Jurgen Klopp was asked about the potential transfer on Sunday and said: “Would you be surprised if I didn’t answer? I never answer this type of question! He’s a really good player I like a lot but I like many others out there. That’s all I have to say about him.”

ALLAN FOR ARSENAL?
Just as Allan Saint-Maximin’s people are making noises about a new contract less than a year after he signed for Newcastle, reports emerge in his native France that he has suitors both in Italy and England. What an astonishing surprise. We are incredibly shocked by this turn of events.

The winger with two Premier League goals and five assists (three of them in one clash with Bournemouth last week) is said by Le10Sport to be of interest to both Napoli (who also seem close to signing Victor Osimhen) and of course Arsenal.

JORGINHO TO JUVE?
Jorginho has not even made it onto the pitch for Chelsea since the restart and that is not a situation that will pass calciomercato by unnoticed. They claim that Maurizio Sarri is of course interested in rescuing the Italian from west London and bringing him to Juventus.

The problem? Chelsea want £45m and Juventus will not pay those kind of fancy prices in the middle of a global recession, though they do believe they can tempt the Blues with one or all of Douglas Costa, Federico Bernardeschi and Alex Sandro. They are probably right.

But Jorginho is not on this list of six for-sale Chelsea players the Express have pulled out of a hat – they are Marcos Alonso, Michy Batshuayi, Tiemoue Bakayoko, Kenedy, Danny Drinkwater and Emerson Palmieri.