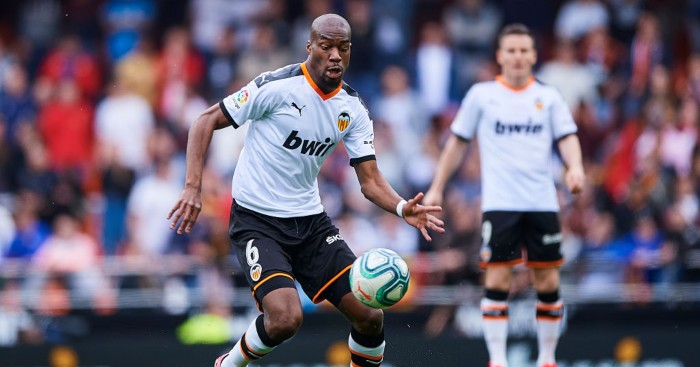 Chris Smalling was set to leave Man Utd this summer but there’s been a twist, plus Tottenham are in for two…

SPURS BARGAIN?
Valencia midfielder Geoffrey Kondogbia is high up on Tottenham’s list of targets for the next transfer window, according to reports. Los Che exercised their ‘right to buy’ option for £22.9m to land the Central African Republic international after his successful spell on loan from Inter Milan in 2018. Two years later and the La Liga club could have to sell one of their best players.

The Evening Standard claims that Tottenham will make a bid of €40m to try and tempt Valencia to part with Kondogbia, who has an €80m release clause in his contract. The report adds that the midfielder ‘could be available for around €30m’ if Los Che don’t qualify for the Champions League this campaign.

Valencia ‘want to make a profit’ on the fee they paid Inter Milan for his services but his contract only has two years left to run, which is unlikely to help their cause.

BLOW FOR PREMIER LEAGUE CLUBS
Another player Tottenham are reportedly interested in is RB Leipzig centre-back Dayot Upamecano. Spanish publication AS claims that the 21-year-old is interesting Spurs, Arsenal and Manchester City.

Over the summer it was reported that Tottenham, and everyone else interested, were put off by Leipzig’s huge £70m asking price for Upamecano. Strangely, this latest report claims that Upamecano, who is a France under-21 international, has a £50m release clause in his deal.

However, it is not the Premier League clubs that are leading the race for this particular player with AS adding that Upamecano is top of Zinedine Zidane’s ‘wishlist’ with the France legend ‘confident he’ll have the youngster at his disposal when next season gets underway’.

MAN UTD TRANSFER TWIST
The Sun reports that Chris Smalling’s permanent move to Roma is ‘on the brink of collapse’ despite ‘falling in love with the country’. The Manchester United centre-back has impressed during his time in Italy with the Serie A giants willing to turn his loan move into a permanent.

His hopes of a ‘dream’ move seemed close to be realised with talks over a possible £25m ‘going well’ but the coronavirus pandemic has seen Roma face ‘financial difficulty’. That means any potential deal to bring Smalling to Rome from Man Utd is ‘all-but’ over.

A source told The Sun: “We know Chris would love to stay and it is a deal which suits all parties at the end of the season. The financial reality, however, is very different. The people at Roma have many new things to consider.

“Ole had to make a quick decision call to send Chris out on loan last summer because Marcos Rojo’s move to Everton collapsed at a late stage. The manager wasn’t surprised how well Chris has performed at Roma and does remain a fan of his.”

Man Utd ‘want his £100,000-a-week wages off their huge bill’ and the report adds that fellow Premier League side Arsenal could still offer him an escape route.

AND THE REST…
Jurgen Klopp is prepared to battle Barcelona to sign Sevilla centre-back Diego Carlos as the Liverpool boss sees the Brazilian as the ideal partner for Virgil van Dijk…Real Madrid are ready to pounce on the uncertainty surrounding Harry Kane’s future with a huge offer including Gareth Bale and James Rodriguez…Chelsea are optimistic about getting an agreement for Lille defender Gabriel Magalhaes, 22, with a fee of around £30m expected to secure a deal for the Brazilian…West Ham vice-chair Karren Brady fears for players’ health and NHS workers if the Premier League returns early…Arsenal and Man Utd face competition to sign Thomas Partey after Inter Milan and Roma joined the race for the Atletico Madrid star.