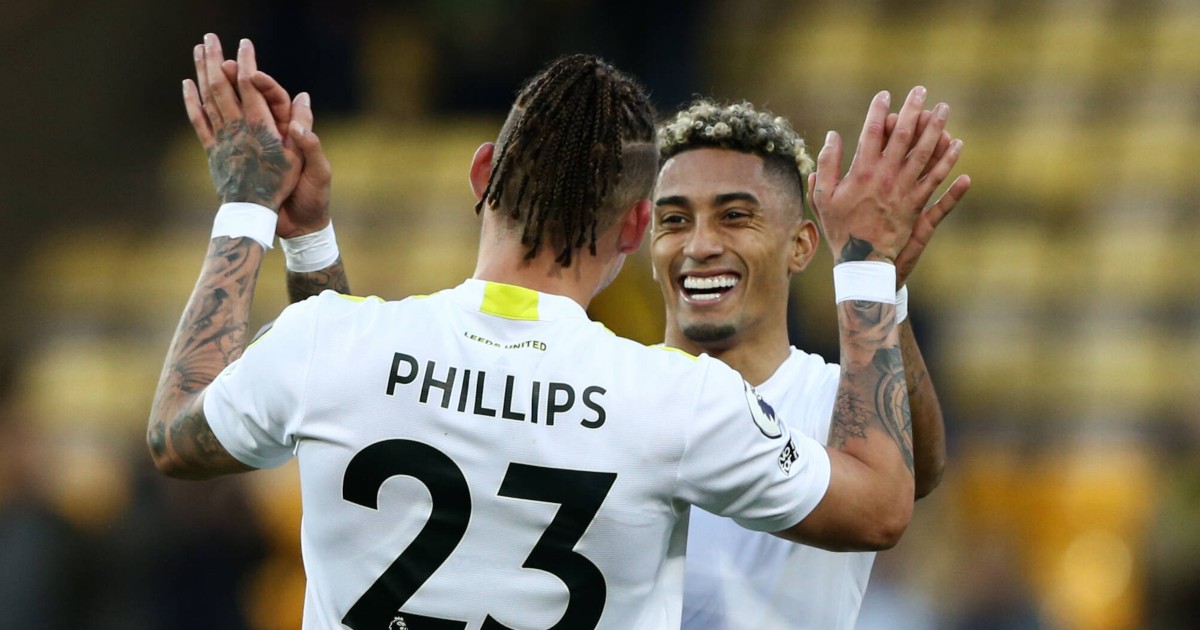 Leeds have turned down a pair of £50m bids from West Ham for their two prized assets, while Tottenham are plotting some deadline day action.

LEEDS BY EXAMPLE
David Moyes did not take Jack Harrison’s hat-trick particularly well. That defeat to Leeds on January 16, combined with a late loss at Manchester United six days later, has wrestled control of the final Champions League qualification place away from West Ham. They are fifth, one point behind the Red Devils having played a game more, and only three ahead of the teams in sixth, seventh and eighth, all of whom have at least two matches in hand. But the Hammers are not about to give up yet.

With a £50million offer for Raphinha already rejected by Leeds, West Ham have returned to the same club with the same bid, albeit for a slightly different human. They want Kalvin Phillips and are happy for people to know about it.

The Sun and the London Evening Standard both call the approach ‘astonishing’. The Guardian join them in clarifying that Leeds have turned the move down. A few other points are made clear: West Ham are willing to wait until the summer if necessary; Leeds want to keep both him and Raphinha; and Phillips could be the ideal pre-emptive Declan Rice replacement. They have a couple of days to make a more compelling case.

Reims striker Hugo Ekitike is also on the Moyes shortlist of attacking targets; the teenager would cost at least £25m.

ROSS AND TURN
The race is on to see who will become Frank Lampard’s first signing as Everton manager. Donny van de Beek seems to be an early frontrunner, while Aaron Ramsey has also been linked. There is the likelihood that he demanded the Toffees sign Mason Mount as his only condition to taking the manager’s job, but that remains to be seen.

A possibility has been floated by Ekrem Konur, a journalist of Calcio Pillole and Fichajes fame. He puts two and two together and comes up with something quite beautiful:

🚨Everton have Ross Barkley on their transfer list. #EFC #CFC

The 28-year-old has played 151 minutes of Premier League football this season, which is actually not bad going all things considered. But he has not featured outside of the FA and League Cups since December 16 and a Goodison Park return could do him some good. Barkley played 34 games, scored six goals and assisted five more under Lampard so it does make sense.

SPURS OF THE MOMENT
Tottenham continue to offer phenomenal value this month, having accomplished approximately nothing despite pairing the expertise of Fabio Paratici with Antonio Conte’s coaching acumen.

There is a shred of hope offered in the Daily Mirror. They claim that Yves Bissouma and Djed Spence are being monitored ahead of potential deadline day moves, although both present the usual Tottenham transfer obstacles.

The ‘belief’ that Brighton will at least engage in negotiations over Bissouma as he has 18 months left on his contract seems fanciful. A mid-season switch would be difficult to arrange and midfield arrivals of any sort still seem tied to the futures of Tanguy Ndombele and Dele Alli.

As for Spence, he would certainly address the apparent need for a new right wing-back. Yet there is a slight issue in that he has already played for Middlesbrough and Nottingham Forest this season and thus could not be registered properly until the summer.

So yeah, Bissouma for £50m and Spence for about £12m sounds great but seems unlikely.