Man United v Spurs could be a a nervy, low-scoring affair. Thankfully, Saturday could bring goals. 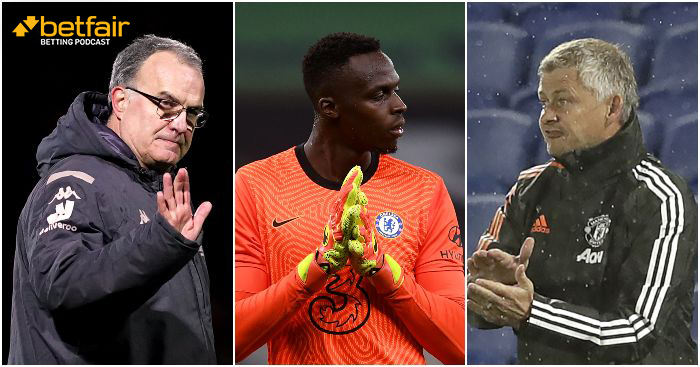 Every week we preview three fascinating things to look out for in the big Premier League games, with further analysis from Betfair’s Football…Only Bettor podcast. There really are some crackers before the international break…

Already it feels like Chelsea have reached a crucial juncture in their season. Before a ball had been kicked we feared for Frank Lampard, an ultra-attacking coach who spent the summer further bolstering his front line instead of paying attention to a creaky defence. That 3-3 draw with West Brom last weekend only confirms what we already suspected: Chelsea are top heavy, and Lampard doesn’t have the tactical acumen to balance attacking football with defensive solidity.

Or maybe he just didn’t have the right players. That’s the final hope, really, as we enter a second year under Lampard that already looks suspiciously like the first. Ben Chilwell and Edouard Mendy, making their debuts against Crystal Palace on Saturday, are under an awful lot of pressure to hit the ground running.

There’s no doubt the two debutants will be an upgrade on Kepa Arrizabalaga and Marcus Alonso, the latter directly responsible for two of West Brom’s goals last weekend, but it is surely incorrect to assume Lampard’s serious tactical flaws can be fixed with new personnel – especially when one of their summer signings, Thiago Silva, has already made a high-profile mistake.

And Palace present a daunting start for the new-look Chelsea back line. Jordan Ayew, Wilfried Zaha, Andros Townsend and Eberechi Eze have all made explosive starts to the season, most notably hurtling forward on the counter-attack in the 3-1 against Manchester United. Roy Hodgson will, as ever, instruct his team to sit back, deny space, then spring forward on the break. It is the perfect way to expose Chelsea’s glaring flaws – and prove that throwing money at the problem won’t make it go away.

Back double chance Palace/draw at 9/5 (Betfair)

Guardiola v Bielsa should be chaos

Pep Guardiola and Marcelo Bielsa go way back. In 2006, the recently retired Guardiola went to Argentina to further his footballing education and learn from some of his idols, and by far the most significant of his visits was the one to Bielsa’s house. The two men spent 11 hours sharing ideas about how the game should be played. Guardiola has considered Bielsa to be the best manager in the world ever since.

Their meeting at Elland Road on Saturday is their fourth as managers, with all of the previous three in Bielsa’s 2011/12 season at Athletic Bilbao and the most recent a 3-0 victory for Barcelona in the Copa del Rey final, Guardiola’s final game in Catalonia. This is a head-to-head with real history. It is also quite possibly the most fascinating tactical battle imaginable in modern football.

There are enough differences between the approaches of Manchester City and Leeds United to ensure they do not cancel each other out or seek to play in the same congested zones. Rather they will clang and clash together, not unlike Leeds’ 4-3 against Liverpool on the opening weekend of the season. It is hard to predict how events will unfold, but we can pretty much guarantee goals.

Leeds will hurtle forward, sitting four or five players on the shoulder of the City defence. Bielsa will get plenty of runners in behind, then, to stretch this game and force it to descend into chaos.  But to do so, he will first empty central midfield, the one area of the pitch Man City are always dominant – and never more so than when Guardiola is forced to play a false nine. With Raheem Sterling dropping and Kevin de Bruyne, Phil Foden and Riyad Mahrez all dancing in the number ten space, Leeds will probably be woefully outnumbered in the middle.

Worryingly for Leeds fans, Liverpool actually hammered them in their opener, conceding from the only three chances Bielsa’s side created. Meanwhile, Man City are generally bitter and vengeful immediately after a defeat. It will be a frenzy at Elland Road, but surely one in which Man City will comfortably triumph.

From Betfair’s Football…Only Bettor podcast: “I’m keen to go against City here. Leeds will be licking their lips. They can land a blow against City. Both teams to score and over 2.5 goals at around 1.80 is the call.”

A crucial moment for Solskjaer and Mourinho

At what point does a bad start turn into the early signs of a crisis? The change is usually sudden, though the journey imperceptible, and given that the Premier League table is traditionally drawn up after four games, the turning point could very well be this weekend. By Monday morning, either one or both of Manchester United and Tottenham Hotspur will end the opening month of the 2020/21 season sat in the bottom half of the table with a single victory to their name.

Jose Mourinho is perpetually under pressure these days, such is the toxicity that has clouded his last two jobs in English football, while Ole Gunnar Solskjaer will never feel completely safe while Mauricio Pochettino waits in the wings. And so Sunday’s clash at Old Trafford is unusually important for a September fixture, not least because the optics are as meaningful as the outcome: if Spurs or United play ponderous, lethargic football – and let’s face it, one of them will – then control of the narrative might start to slip through the manager’s fingers.

Spurs were dreadful against Newcastle, somehow failing to build any sense of momentum from their 5-2 destruction of Southampton the week before. United, though understandably affected by their shortened pre-season, were appalling against both Crystal Palace and Brighton. Both managers could really do with a big result to lift the spirits.

Unfortunately, that sort of pressure rarely leads to an entertaining game. What’s more, Mourinho and Solskjaer are both naturally conservative in ‘Big Six’ clashes, preferring to cautiously sit off and wait for the other team to make a mistake. It’ll be a nervy, low-scoring affair.

From Betfair’s Football…Only Bettor podcast: “United look impotent going forward and a bit of a shambles defensively. They are under-priced here. Spurs have a horrific schedule – this will be their third match of the week – so it’s quite hard to read where they’re at. I wouldn’t be surprised by a draw at 3.75 here.”