Liverpool v Arsenal is the real cracker. But first, can Brighton plunge Man United into crisis? 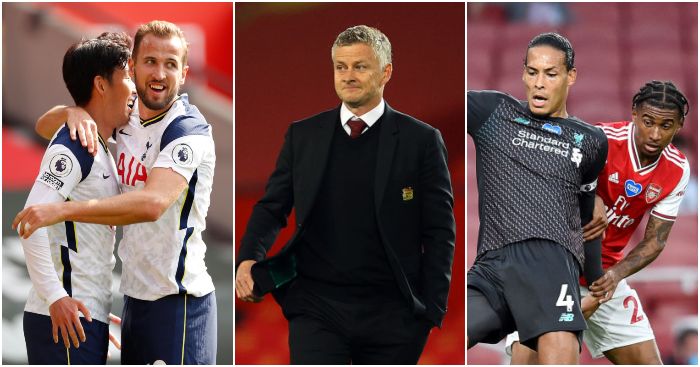 Thanks to our partners, Betfair, each week we’ll be looking at a treble of fascinating things to watch out for in the televised games. Liverpool v Arsenal is the real cracker…

The volume of hand-wringing and doom-mongering that followed Manchester United’s defeat to Crystal Palace last weekend may well have been over the top, but the reaction was not merely an example of the media’s tendency to lurch between crisis and breakthrough with each fresh result.

Yes, perhaps United’s performance was lacklustre simply because their 2019/20 campaign only ended five weeks ago. But the fact so many went straight to pointing out Ole Gunnar Solskjaer’s flaws and questioning the club’s long-term vision is telling. A deep and real anxiety about the club’s direction is revealed by how quickly analysis of a single 90 minutes descends into damnation; well-run clubs are not subject to such narrative instability on the back pages. Or on these pages.

United seem perpetually on the verge of crisis because there is a collective lack of belief in Ed Woodward’s transfer policy and the manager’s tactical acumen. This will not go away until Solskjaer shows a clear sense of purpose and structure in his game plans; until United are insulated from spells of bad form by sticking to tactical principles rather than rely on emotions and confidence, which are fickle by nature.

They took a serious hit against Crystal Palace, and now travel to the Amex to face one of the division’s brightest strategists in Graham Potter. He knows precisely how to create a rigid defensive structure, precisely how to pinpoint opposition weaknesses, and precisely how to out-think and out-move managers who, like Solskjaer, rely on vague notions of team spirit and attacking football.

Brighton were unlucky to lose 3-1 to Chelsea on the opening day, winning the xG battle 1.44-1.27 and largely outplaying the visitors. They have the confidence and the skill to capitalise on any further sluggishness from Man Utd. If they win, Solskjaer will be under serious pressure.

Back double chance Brighton/draw at 1/1 (Betfair)

From Betfair’s Football…Only Bettor podcast: There’s an argument to say at 1.80 United are value, but they were alarming against Palace last weekend. If I have to choose one bet it’s over 2.5 goals at 1.87.

Spurs look to exorcise demons at crucial juncture for Mourinho
Newcastle United’s 1-0 win at Tottenham last September was the turning point for Mauricio Pochettino and arguably the catalyst of his eventual dismissal. It was a dismal performance remembered for Joelinton’s only Premier League goal until June (some 2130 minutes later) and for the desperate lack of imagination or spirit in the Spurs XI. It was also the only home game Pochettino lost in the league that season and, looking back, the only poor result of their opening six matches.

Haunted by the memory of that day, Spurs welcome Newcastle at this crucial moment for Jose Mourinho. He, like Solskjaer at United, always seems to be teetering on the edge of crisis mode because of the inherent mistrust in the foundations of his project. The 5-2 win at Southampton has relieved pressure. Dropped points against Newcastle would pile it back on again.

For the Spurs manager, the collective unease comes down to whether his tactics can really work in the modern era. The absence of a press, the safe mid-block, and the quick counter-attacks might work against opponents who want to dominate the ball or who, like Saints, inexplicably play a high defensive line, but can it really function week in, week out against a deeper shell?

Newcastle’s tendency towards an ultra-defensive formation is exactly the kind of system that can leave Mourinho looking woefully behind the times. That is why Sunday’s game, though on paper the least challenging of Spurs’ opening three, is the truest test of how the club will fare in 2020/21. Failure to beat Newcastle will put Mourinho under the heat of the spotlight.

Back double chance Newcastle/draw at 7/4 (Betfair)

Liverpool are unbeaten in the league at Anfield in 51 games (40 wins, 11 draws) in a run that stretches back to a defeat to Crystal Palace in April 2017. To put into perspective just how long ago that was and just how much the world has changed since then, Christian Benteke scored a brace that day.

They are still some way short of Chelsea’s all-time English record of 86 games, but are closing in on a club-record 63, set between 1978 and 1981, and are on course to break it against Fulham in March. But perhaps the biggest obstacle to doing so comes this Monday when Jurgen Klopp faces Mikel Arteta, a man who has now recorded back-to-back wins against him (if you count penalty shoot-outs).

In the 2-1 win in July at the Emirates, Arsenal’s high pressing forced two defensive errors – one from Virgil van Dijk, one from Alisson – and this tactic could threaten again at Anfield. What’s more, Arteta likes there to be plenty of runners on the shoulder of a high line, which is the tactic that allowed Leeds to score three times at Anfield on the opening day.

However, Thiago should help Liverpool gain a bit more control against the Arsenal press and ensure they set the tempo for long periods. But it would be foolish to write off the Gunners, particularly now that Kieran Tierney and Bukayo Saka are working together so effectively down the left wing – where Liverpool are most vulnerable.

From Betfair’s Football…Only Bettor podcast: Arsenal look more organised and more harmonious. There’s more bite about them too. But this is the litmus test of their progress under Arteta. As a punter you’d gobble up that 1.50 on Liverpool. I would back Yes in Both Teams to Score.

Betfair Betting Podcast · Football…Only Bettor Episode 46: He might have a Lego head but there is a brain in there