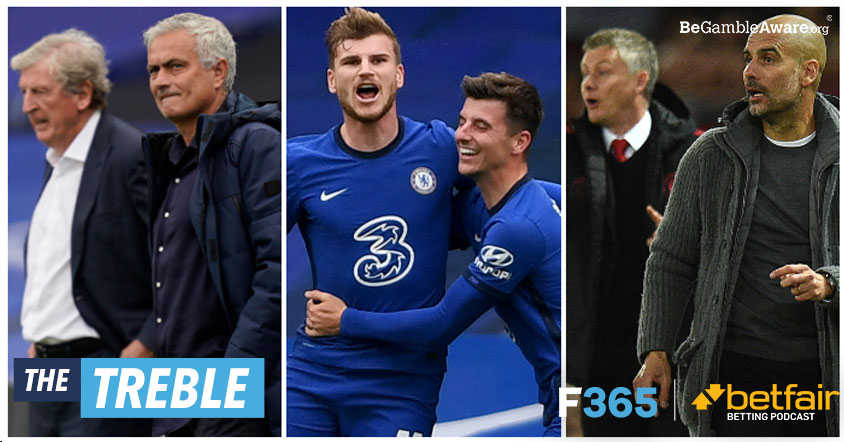 Every week we preview three fascinating things to look out for in the big Premier League games – the Manchester derby is centre stage this week – with further analysis from Betfair’s Football…Only Bettor podcast.

A chance for Guardiola to kick-start Man City’s season
It says a lot about the unusual state of this season’s Premier League table that a win for either Manchester club on Saturday will technically launch a title challenge, considering both Man Utd and Man City have performed well below expectations so far. Between them they’ve amassed a meagre 39 points from 20 matches, an average that barely scrapes fourth most years.

United are in the worse shape, hobbling on without a clear tactical direction, generally outthought and outplayed by every club they face. But Man City are also passive, their pressing having dropped significantly this season to leave them flat in possession and vulnerable to counter-attacks when the ball is lost. And so the most likely outcome on Saturday is a low-tempo game between two stuttering sides relatively happy with a point.

We know what the pattern of the game will be. United will sit deep and absorb pressure, hoping to reduce City to pointless sideways passing before hitting them on the break with long balls in behind. It’s a system that saw them win both league fixtures last year, and not an awful lot has changed since they last met in March.

But nevertheless this is a big opportunity for Guardiola. On Tuesday RB Leipzig showed what happens when this disorganised, drifting Man Utd side are faced with energy and purpose. Man City, then, should be inspired to blow away the cobwebs and play with the assertiveness – and the hard pressing – that defined them between 2017 and 2019.

Do that and they’ll emphatically beat their great rivals, rediscover themselves, and move within three points of the top of the league all at once. It’s the perfect way to launch a belated title challenge.

RB Leipzig have offered a reminder of how flimsy Solskjaer’s deep-lying United can be. This is City’s moment to seize some initiative…but judging on how things have gone this season, a cagey draw is more likely.

From Betfair’s Football…Only Bettor podcast: “At Infogol we still have United down to finish fourth. They can still be a top four team under Solskjaer. He’s a good man manager but, when it comes to tactics and improving the team, he’s not up to the job.”

Ancelotti needs a big performance – but probably won’t get it
Everton have won just five points from their last seven Premier League matches, a run that’s a little bit too relegation-y for a club that harboured ambitions for an assault on the top four just a couple of months ago. For the most part, this can be put down to a simple regression to the mean. There’s no need for Carlo Ancelotti to panic.

Then again, it’s a little worrying how easily Everton are rocked. There’s only so long you can attribute poor results to injuries when they are essentially coming one at a time at Goodison Park. First it was argued they can’t play well without Richarlison. Then things turned sour when Allan was out. Now Lucas Digne’s injury seems to have derailed them. Everton aren’t much of a team if they fall apart whenever a single cog comes out of place.

Ancelotti needs a big performance on Saturday evening, the sort that restores confidence and recalibrates the campaign, and Everton have a good recent history of doing just that against this weekend’s opponents, losing once at home across Chelsea’s last six visits. They were 3-1 winners last December, when Duncan Ferguson’s battering ram of a team set a new Premier League record of 37 tackles in a single game.

An awful lot has changed since then – for both clubs. Chelsea look defensively solid now that N’Golo Kante is commanding midfield in a new Makelele role, while Thiago Silva’s calming presence and the hard pressing of those new German-schooled attackers has largely shut down opposition counters.

It’s hard to see how Everton, whether in a back three or a back four, will close out all the gaps for Timo Werner, Christian Pulisic, Mason Mount, and Kai Havertz, or how Ancelotti can inspire an attacking performance cohesive enough to breach a Chelsea defence that has conceded four goals in 12 games.

From Betfair’s Football…Only Bettor podcast: “It’s Chelsea all the way in this. They are one of the best bets in the Premier League this weekend. I also like the look of overs. Everton are missing players and I think the balance of their team is off.”

A test of whether Mourinho’s approach can win Spurs the title
We now have enough evidence to say that Jose Mourinho is back to his best; that the Old Trafford debacle – two years of tedium, then total collapse – reflected the unique difficulty of the Manchester United job rather than a sign of his own fading powers. Tottenham Hotspur are a proper Mourinho team, ruthlessly drilled both tactically and psychologically.

But beating Arsenal 2-0 does not mean you are ready for a title challenge. In the slog of a 38-game season, a better test of whether Mourinho’s reactive tactics are suited to the modern game are matches like this weekend’s at Selhurst Park. Spurs won’t be allowed to sit off or counter-attack against Crystal Palace, who – like Newcastle, who scraped a point, and West Brom, who only fell late on – will invite pressure to negate Mourinho’s tactical approach.

It is the big question mark that lingers over Mourinho’s second wave: in an age when financial disparity makes football a territorial battle, when the ‘Big Six’ are forced to hold 65+% possession, do his tactics create enough chances to win a title?

Crystal Palace are the most ruthlessly one-dimensional counter-attacking teams in the division. If Spurs find a way through Palace on Sunday, then we might just have our answer.

From Betfair’s Football…Only Bettor podcast: “They have a really deep squad and Jose Mourinho has balanced the Europa League and Premier League very well so far. I’m not jumping on their title bandwagon just yet. Going away to Palace is the type of game that will, or will not, win Spurs the title. Palace will try to sit back and counter-attack. I don’t see Spurs racking up a score here, although they could nick a late winner.”