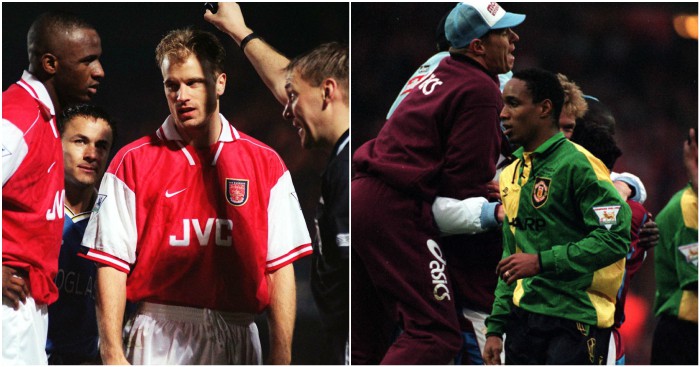 QPR – 1985-86
Liverpool pipped derby rivals Everton to the First Division title by two points before beating them 3-1 in the FA Cup final as Kenny Dalglish became the only player-manager to win the Double. But a combination of QPR and the Reds themselves denied Dalglish the opportunity to win English football’s first treble.

Mid-table QPR won the first leg of their Milk Cup semi-final on the plastic pitch at Loftus Road, with Terry Fenwick’s goal giving Rangers a lead to defend at Anfield. Liverpool, though, conspired to blow it at home. Jan Molby missed a penalty awarded for a handball outside the box, with the referee seeking refugee from furious Rangers players by standing almost on the Kop. Liverpool then led twice but second-half own goals from Ronnie Whelan and Gary Gillespie sent Rangers to Wembley, where they were thumped 3-0 by Oxford.

Aston Villa – 1993/94
Manchester United, with one of their strongest ever sides, eventually strolled to their second consecutive Premier League title, while a 4-0 win over Glenn Hoddle’s Chelsea in the FA Cup final later earned the Red Devils their first ever Double. It could have been even more glorious if it weren’t for Ron Atkinson and his Aston Villa side.

Seven and a half years after being sacked by United, Big Ron took revenge by halting their Treble charge in the Coca Cola Cup final. Dalian Atkinson shinned in the opener past Les Sealey before Dean Saunders’ second half brace, including a late penalty after Andrei Kanchelskis had been sent off, gave the Villans a sweet victory.

York City – 1995-96
A day and a month after Alan Hansen said “you can’t win anything with kids”, those seemed like wise words when Manchester United’s reserves, featuring David Beckham, Lee Sharpe and Ryan Giggs, were smashed 3-0 at Old Trafford by York City.

The big guns, including Eric Cantona playing in his second match following his eight-match ban, were back for the second leg but another Paul Barnes goal at Bootham Crescent proved crucial as the Minstermen secured a 4-3 aggregate win.  Having been dumped out of the UEFA Cup by Rotor Volgograd between the ties, Fergie’s young United side were left to concentrate on the Premier League and FA Cup. Unbelievable as it seemed at the time, they won both.

Chelsea 1997-98
Arsenal stormed to the title by winning their last 10 matches and breezed past Newcastle in the FA Cup final. But their Treble hopes were ended by Chelsea in the Coca-Cola Cup semi-final, as Gianluca Vialli marked his first match in charge of the Blues by spoiling Arsena Wenger’s hopes of a clean sweep.

Some wasteful finishing saw Arsenal take only a 2-1 lead to Stamford Bridge and, days after Ruud Gullit was sacked and replaced by the Italian, Chelsea turned around the deficit thanks to strikes from Mark Hughes, Roberto Di Matteo and Dan Petrescu. Patrick Vieira’s red card with the aggregate score level, moments before Chelsea scored two quickfire goals, proved to be pivotal.

Blackburn 2001-02
Arsenal claimed another Double, their third, in 2002, with the Gunners sealing the title by winning at Old Trafford before beating Chelsea 2-0 in the FA Cup final in Cardiff. But Wenger chucked in their treble hopes by fielding a reserve side at Blackburn in the Worthington Cup fifth round.

Coming shortly after Wenger had signed a new four-year contract and the club had received the provisional go-ahead to build the Emirates Stadium, the Gunners fielded the following side: Taylor, Tavlaridis, Keown, Upson, Edu, Grimandi, Pennant, Inamoto, van Bronckhorst, Wiltord, Kanu. They were 3-0 down inside 21 minutes before Matt Jansen later completed his hat-trick.

Luckily for Arsenal fans, there doesn’t appear to be any video footage on the internet, so for Rovers supporters, here’s the final against the other north London side…

More from Planet Sport: Where does Andy Murray’s Olympic gold rank in his top 10 achievements? (Tennis365)