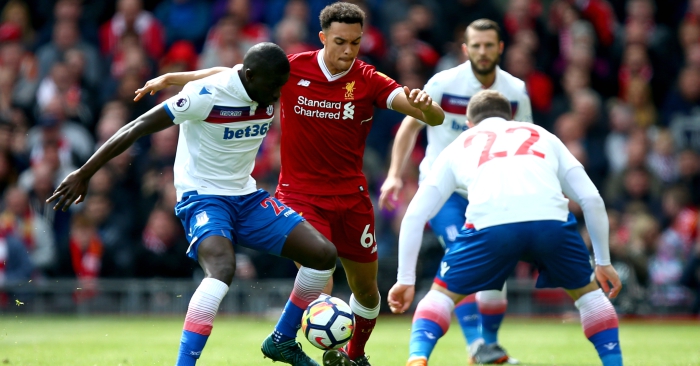 It was in September 2016, 11 months after joining Liverpool, that Jurgen Klopp compared the positions of full-back and midfielder within his teams in the greatest detail.

“This kind of full-back now is more like a midfield player,” Klopp said on Sky Sports’ Monday Night Football. “They play in half-spaces, they play really high. They are wingers sometimes, sometimes centre midfielders. The rule is: be an option in terms of getting a pass or be protection. If you are an option you can be high or you can be in the half space.”

Then, Klopp was talking about James Milner, who the German revealed had to be persuaded to play at full-back. Milner’s concern was that he would not be as involved in play as he would like, but Klopp’s response was that Milner would see far more of the ball than he might think. The manager was right: Milner touched the ball 285 times more than any other Premier League player last season.

In April 2018, the similarities between these two roles in Klopp’s team are relevant again. With Alex Oxlade-Chamberlain, Adam Lallana and Emre Can all injured, Klopp gave Trent Alexander-Arnold his first Premier League start as a midfielder against Stoke City. Joe Gomez stepped in at right-back.

Alexander-Arnold was hardly a square peg being crammed into round hole. No right-back in the Premier League’s top six has attempted more crosses from open play in the Premier League. Alexander-Arnold may not quite have the natural wing play of Andrew Robertson on the left, but he is just as comfortable in possession as the central midfielders who play in front of him.

Playing in midfield also clearly reduces some of Alexander-Arnold’s defensive responsibility. The one regular criticism of his displays this season is a tendency to be caught on the wrong side, as we saw against Manchester United and Marcus Rashford in March. All evidence points to Alexander-Arnold being a quick learner from his mistakes, but playing Gomez behind him gave him a comfort blanket.

His was not the perfect performance against Stoke. Alexander-Arnold had his side’s only shot on target in the opening 65 minutes, sent through by the below-par Mohamed Salah but shooting straight at Jack Butland, but he occasionally ceded possession when playing more adventurous passes. His four crosses (more than any other teammate despite playing more centrally) failed to create a significant chance.

But nor should we have expected perfection. There is a perennial danger in forgetting how quickly young players have come and thus judging them by unrealistic standards. Eight months ago, Alexander-Arnold had never started a league game at Anfield. Now Klopp is trusting him in multiple roles within his first team.

In any case, inexactness was a shared feature amongst Liverpool’s players. This was a match that came both before and after the Lord Mayor’s show. Klopp attempted to whip up the Anfield crowd in the build-up to the game, but the memo didn’t get through to the players. Barring an extraordinary fightback from Chelsea, it will matter not a jot.

But Klopp’s team selection may have wider importance than Saturday lunchtime and Anfield. Alexander-Arnold’s form over the last few months has seen increased calls for him to be selected by Gareth Southgate for the World Cup in Russia, but it is difficult to argue his case as a right-back alone. Some squads will contain only one specialist in that position, but two is the absolute maximum. Kyle Walker and Kieran Trippier both have deservedly better cases than Alexander-Arnold. Right-back is England’s strongest suit.

It is something that Klopp specialises in too. Gomez, Emre Can, Philippe Coutinho, Oxlade-Chamberlain, Salah, Sadio Mane, Roberto Firmino, Georginio Wijnaldum, Ragnar Klavan and James Milner have all played in multiple positions for Liverpool in the Premier League alone this season. The fluidity of their front line has gained significant attention, but there is versatility all over the pitch.

“Is he ready? Yes, I think he is ready for a lot of things,” says Klopp on the subject. “He is not finished in his development and a lot will come which is really good news. But with regard to the World Cup, somebody has to make that decision and thank God it is not me.”

If versatility is an attractive trait to a national team manager on the eve of a tournament, this was the perfect time for Alexander-Arnold to demonstrate another string to his bow. With Oxlade-Chamberlain and Lallana injured, there are suddenly places up for grabs in Southgate’s midfield, and Alexander-Arnold is now odds on in places for a seat on the plane. Could his breakthrough season have the happiest of endings?