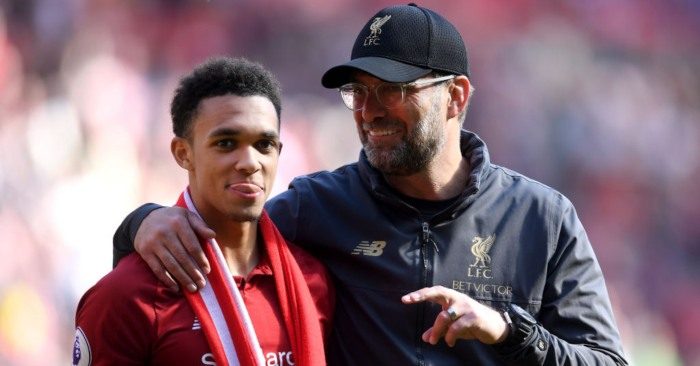 You may quibble about the order – and you may well quibble about the inclusion of Steven Gerrard after his curtain came down in Los Angeles – but those seven names spring to mind when discussing the great players who have devoted their whole careers to one club in the Premier League era. Barring the anomaly that is Le Tissier, it’s no coincidence that those players were stationed at big clubs challenging for trophies, and almost inevitable that two of those players were at Liverpool. It’s the kind of club that engenders that kind of loyalty.

Harry Kane may eventually join that group – it can hardly be held against him that his parent club sent him out on four largely forgettable loans – while some Tottenham fans might want to argue that Ledley King should already be on the list, but Liverpool have a candidate for this exclusive members club who is yet to play even a century of games. Even at 20, Trent Alexander-Arnold looks like a safe bet to play 500 Premier League games for Liverpool and precisely none for anybody else. Even at 20, he is third on a list of Liverpool Academy graduates to have played the most Premier League games solely for the Reds. The list reads Carragher 508, Gerrard 504, Alexander-Arnold 55, Spearing 30.

There have been other great players who have started at Liverpool but left for greener grass, with Raheem Sterling the latest to head through the exit door after Michael Owen, Robbie Fowler and Steve McManaman, with three-quarters of that quartet lured away by the prospect of playing with great players at great clubs while challenging for titles. That Gerrard almost took the same path to Chelsea has to be recorded here, but eventually “the mother of all misunderstandings” (Jamie Carragher’s words) was cleared up and he remained with his beloved Liverpool. That he had initially considered an exit in 2004 because Liverpool had finished 30 points behind Arsenal is pertinent; emotions and ambitions can pull you in opposite directions.

Alexander-Arnold may never face the same dilemma. At the age of 20 he is about to play in his second consecutive Champions League final and has narrowly lost an epic Premier League title by a point; he has simultaneously won absolutely nothing and yet almost achieved enough for most footballers’ lifetimes. It seems inconceivable that he will not win at least one major title, with his third, excellent chance coming next week in Madrid. And to him it seems inconceivable that he would ever need to leave Liverpool.

“As long as possible I want to have that relationship with Liverpool, to be a Liverpool player. To say I have done that for the whole of my career is something I have dreamed of being able to say,” is one quote. He is like Mark Noble but really, really good; and that is pretty much what every fan wants from their Academy graduates. And the wonderful thing about supporting Liverpool rather than Fulham, Huddersfield or even Everton, is that you might be able to keep hold of your really, really good Mark Nobles. If Alexander-Arnold and Liverpool both fulfil their tremendous potential, their next 12 years should be intertwined.

The Times’ Alyson Rudd prompted some hilarity this week when she named Alexander-Arnold in a Premier League XI of the decade – Kyle Walker probably wants a word after his three PFA Team of the Year appearances of the 2010s – but it’s easy to believe that he will be the no-brainer selection in ten years’ time, whether at right-back or in central midfield. He is the true Young Player of the Year, one of two potentially world-class young English right-backs and a one-club hero in the making. Lucky, lucky Liverpool.